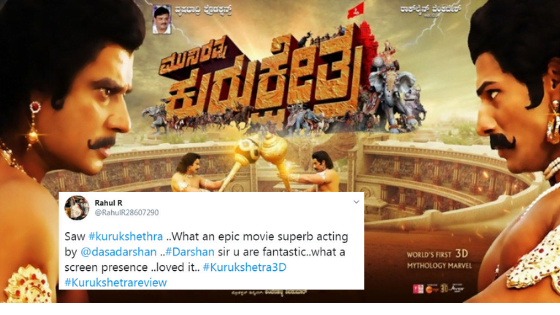 A mythological story after a long time in Sandalwood. Kurukshetra movie is out today in theaters.

Firstly, a stellar star cast of the film is one of the reasons for Kannada movie lovers to watch this movie on big screens. In addition, Challenging Star Darshan and P Ravi Shankar performances steals the show as Duryodhana and Shakuni.

In recent times, apart from Challenging Star Darshan, there’s no else who can pull off a Mythological character.

As we all know, Kurukshetra movie is the reinterpretation of the epic poem Gadhayuddha by Ranna. Also based on Indian Mythology Mahabharata. The story revolves around the Kurava King which is played by Darshan.

The movie is out in three languages Kannada, Telugu, and Tamil. Unfortunately, this movie was the last one for the legendary actor Late Amabareesh.

The movie is said to be shot in 3D format. So, if this is true, then it becomes the first movie to do so in the Kannada Film Industry.

To wind it up, it is all left to you guys whether to watch it or out. At the same time, we ease it up for you guys to decide.

Bengaluru Has Its Own Rainwater Harvesting Theme Park & It’s Sakkath

6 Sakkath Memories That Every 90s Kid Remembers About Namma Bengaluru