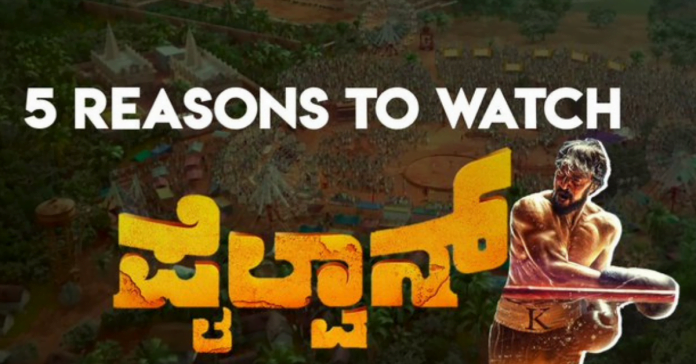 Right after the blockbuster Hebbuli, the duo has come together again for a power-packed sports-oriented flick. A challenging role for Kichcha Sudeep, as he will be appearing as a wrestler and also a boxer for the first time in this avatar.

Firstly, the movie is written and directed by the famous cinematographer of Kannada Film Industry S.Krishna. Also, he wears the producer’s cap under the banner RRR productions.

Pailwaan releases on 12th of September 2019. The film is all set to release in five languages across India. The number of screens that this movie has got is huge. After KGF, Pailwaan becomes the second Kannada movie to get the biggest release.

We are damn sure that this movie is going to be a feast to watch kichcha on the big screen after a long time. That moment of sitting in a theater waiting for the movie to start on the first day first show is a unique experience that everyone should be a part off.

First the foremost thing, Sudeep will be appearing in a dual role. As seen in the trailer, there are two shades for the character. He is seen as “Kusthi Patu” and a “Boxer” for the very first time. The actor’s first sports-oriented movie. After a very long time, the Kannada audience also gets an opportunity to witness a sports drama.

The fans are all excited to see Sudeep in this avatar.

Without a second thought,

This is where it gets exciting, its the third movie for the director and the second one with Sudeep. Both movies are blockbusters. This movie has all of it to be a huge hit across the globe. After Hebbuli, Kichcha Sudeep, and Krishna have joined hands again, for a sports-oriented film Pailwaan. Also, with the help of Sudeep, Krishna decides to wear the producer’s cap. That’s a huge responsibility, more than that he gets the creative liberty as a director.

The director has made sure that his movie, right from the beginning has made a lot of buzz across the film industries. The excitement to see this combo again is at peak.

However, as seen in the trailer, the action sequences in the film seem to be an integral part of the script. Also, Sudeep is playing the role of a wrestler and a boxer. To be seen as authentic as it on the screen the team has got the international stunt director on board to shoot the boxing sequences. You guys might have heard the name Larnell Stovall, here are his few notable works – Captain America, Civil War, Sultan, and Bahubali.

As we all know, Suniel Shetty is from Karnataka. Born in Mysore, he never got an opportunity to act in Sandalwood movies. Well, this movie is a perfect launch for the actor. Hope we can see him acting in many other roles. There’s a Kannadiga connect too. He is playing the role of Sudeep’s trainer and also a backbone to Sudeep’s character in this movie. The fans are waiting to see Kichcha Sudeep and Suniel Shetty together on the big screen for the first time.

The song “Baaro Pailwaan” is already a hit. The signature step of this song looks awesome.

To begin with, there’s Sudeep of course, Suniel Shetty, Aakansha Singh, Sushanth Singh, and Kabir Duhan in the lead roles. Further, there is Sharath Lohitashwa, Sadhu Kokila, Chikkanna, and others.

In addition to this, according to a report, the movie is releasing USA, Canada, UK, Singapore, Malaysia, Sri Lanka, UAE, Qatar, Oman, Kuwait, Australia, New Zealand, Nigeria, Liberia, and Ghana.

Hope the movie becomes a huge hit across the nation. But, the only question left, will the Bollywood accept this movie having watched movies like Dangal and Sultan. Pailwaan looks like having the same basic plot as of Sultan.

But there are huge expectations here in Sandalwood. Let’s wish them a big success.

In the meantime, do not forget to check out what twitter has to say about this movie on the day of its release. Watch out this space for the review of the movie Pailwaan on 12th of September 2019.