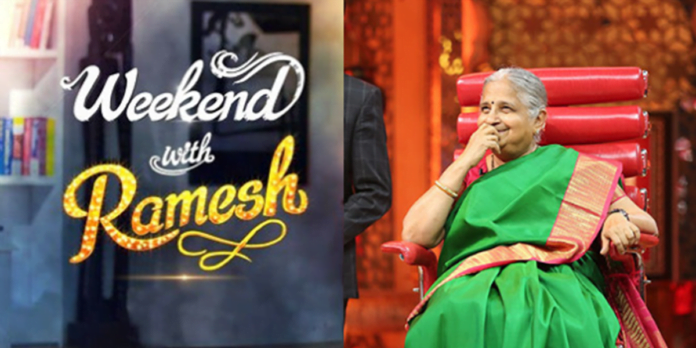 Did someone say simplicity?? Then, the perfect synonym for the word simplicity is Smt. Sudha Murthy. Yes, Weekend With Ramesh was with Sudha Murthy on the red chair.

Sudha Murthy is known for her intelligence, modesty.

In addition to this, popularly known as an author, social worker and her philanthropic works through the Infosys Foundation. The role model for all generations.

Welcome to the next episode.

6 Moments From Weekend With Ramesh With Sudha Murthy

Sudha ma’am shares her childhood memories spent in this home. The values learnt from her grandfather. Furthermore, her interests in literature during childhood days. In fact, she had learnt around 2000 Vachanas back then.

Sisters and relatives of Sudha Murthy share some of the childhood memories. Especially, donating a ring in school as an aid to the nation during the Indo-China war. This show how generous Sudha ma’am was.

Sudha Murthy bows down to her guru as courtesy and does not sit until her guru leaves the podium, as a act of respect.

This can be the most priceless moment for her guru – renovating the same school which she studied in and named it after her guru.

Graduated from Bhoomaraddi College of Engineering in Hubballi. Being the only girl in 150 students. Sudha Murthy remembers issues faced in her college due to improper sanitization. It was this experience incepted the idea behind building more than 15,000 toilets.

She was a topper in Engineering of the state.

Sudha Murthy shares her campus selection incident and how she becomes the first female engineer in Telco.

Sudha Murthy speaks of her mission against the Devadasi culture and the challenges she faced during this journey. From recuing nearly 20,000 women and making them self reliant by teaching them various skills.

A book named Three Thousand Stitches written by Sudha Murthy which speaks about some of the prevailing biases that are still so strong in society.

The foundation has built houses, toilets, schools, hospitals, rehabilitation centers, orphanages, over 3500 libraries in several displaced areas in the country and also donates around 400 crores every year.

She is always learning and a true inspiration for people around the globe.

Finally to sum it up, here is a quote