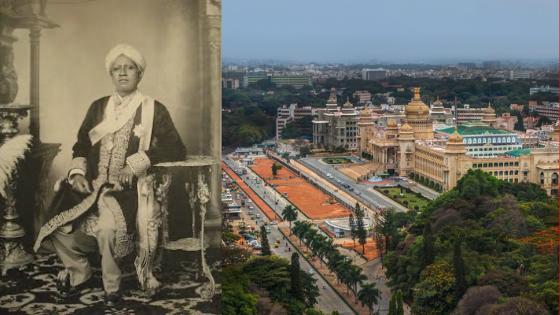 Interestingly, many of them termed him as “Creator of Modern Bengaluru.”

How many of you know this??

Well, this article is all about K Seshadri Iyer s vision, efforts, and the achievements of this brilliant man.

To begin with, the man behind Asia’s first major hydroelectric power plant at Shivanasamudra. Also being responsible for the mining operations at Kolar Gold Fields (KGF).

In 1902 he drew a voltage line from Shivanasamudra to KGF, transforming mining operations at the Kolar Gold Fields. The goldfields were 147 km away, making the transmission line the longest in the world at the time. In addition to this, the power was supplied to construct Mettur Dam in the 1930s from Sir Sheshadri Hydel Station, Shivanasamudra.

We all know that Bengaluru is one of the first cities to be electrified. The reason behind this is K Seshadri Iyer. In 1906 the first voltage line was taken from Shivansamudra all the way to Bengaluru.

In 1889 he constructed the famous Glass House at Lalbagh. The Glass House is the Lalbagh garden’s biggest attraction. Also, to use it as a venue to host the flower shows. The first flower show at Glass House was in the year 1912.

This is another key point. In the year 1990, he began the construction of Victoria Hospital.

Seshadri Iyer began the Chamarajendra Water Works to supply water to the city from Hesaraghatta Lake in 1894.

With the assistance of a block water system and steam motors, water was pumped up to supply from where it streamed to Malleswaram and afterward to the remaining of the city.

This basic yet powerful plan worked splendidly. In this case, filling in as a generous wellspring of water for around 45 years.

5. Encouragement to Set up The Indian Institute of Science

Quality education will serve the future of the country. With this in mind, Seshadri Iyer convinced Krishnaraja Wodeyar IV, to donate land in the heart of Bengaluru. Also insisted to provide other facilities in order to fulfill the Jamsetji Nusserwanji Tata vision.

This research institution was later renamed as The Indian Institute of Science (IISC) in the year 1911.

7. Development of the City

A disastrous plague hit the city in the year 1898. In this case, it wiped out most of the city’s population.

In the repercussions of the catastrophe, Sheshadri Iyer found a way to help the general population of the city and improve their living conditions. Furthermore, Lanes were decongested, new trees were planted, streets were extended and also sanitation was improved.

In addition to this, he also took necessary measures to increase the employment opportunities for the people of the city.

In conclusion, his contributions made him “Creator of Modern Bengaluru.”

Cut to the present day, Bengaluru remembers for his valuable contributions. A city’s extension was named after him which is Seshadripuram. Likewise, there is Seshadri Road, Seshadri Memorial Library and also his statue in Cubbon Park reminds the citizens of Bengaluru of this notable administrator.

Also Read: THESE SAKKATH TWEETS ABOUT BENGALURU TELLS WHETHER YOU ARE PART OD THIS CITY OR NOT!