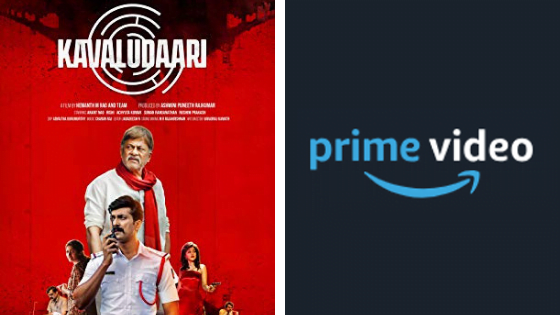 To begin with, when was the last time you saw a crime based investigative thriller movie in Kannada??. Hemanth M Rao’s Kavaludaari movie is here.

It is very rare that the Kannada audience gets to see this kind of genre. Especially which appeals to the class audience, who are not the fan of regular commercial flicks. Also, this genre successfully brings those audiences to the theaters apart from the regular movie watchers.

The Kavaludaari trailer has set huge expectations among the people. As a result, everyone are eagerly waiting for its release. In addition to this, the trailer also guarantees a suspense based screenplay and edge of a seat thriller experience.

His second directorial movie after Godhi Banna Sadharana Mykattu which has already earned a cult fan following for the director. Besides, being one of the screenwriters for the blockbuster Hindi film “Andhadhun” has proven his capabilities as a writer-director.

By the way, are you also one among them who enjoyed watching GBSM then you got be super-thrilled to watch his next movie Kavaludaari.

Being a superstar himself – Puneeth Rajkumar aims to produce different genre of movies to Kannada audience. His support for the new pool of talents is evident enough, as he has already backed 5 more films which are under production in this banner.

However, it said that Puneeth Rajkumar’s vision for Kannada movies is huge and he has great ideas about the movies he wants to produce. In this case, Puneeth stands out.

Anant Nag and Hemanth M Rao duo are back once again after the GBSM. Therefore, it’s an absolute treat to watch him perform on the big screen as never seen before avatar in this movie under Hemanth’s direction.

Addressing to the media, Anant Nag said that “I quite liked what I heard and, honestly, after over three decades in the industry and close to 300 films, this was a role I have been waiting for”. Without having a second thought, you should be super-thrilled to watch him in this movie.

4. The Ever Gorgeous Suman Ranganathan

His music is yet another reason for you guys to be super-thrilled to watch this movie. This movie has 5 songs and all of them are unique especially the songs sung by Sanjith Hegde and Puneeth Rajkumar are awesome. The background score is mindblowing.

The new age directors are giving fresh air to the filmmaking. With the content driven plot, this movie surely attracts the urban crowd and has set the right expectations among them. But will it able to reach the mass audience??

If you love watching content driven movies then the only option left is to book your tickets right away.

7. A Edge of the Seat and Super Thrilling Experience

A neo-noir thriller, murder mystery, the lead actors investigation leads them across trials that will put their wit, resolve and morals to test. Furthermore, the 2 mins trailer is enthralling, so captivating as it leaves the audiences with so many questions. Are you ready to experience an edge of the seat and a super thriller movie?.

Brilliant cinematography by Advaitha Gurumurthy. The visuals are so fresh that it enriches the visual experience of the movie.

After a fantastic run at the box office, this crime based investigative thriller gets a digital release on Amazon Prime Video.

If you have missed out watching this awesome movie at theaters, then here is a golden opportunity to watch this movie at your comfort zone.

Go watch it on Amazon Prime – The Second, Third, Fourth time. The movie is worth watching N number of times.

In the meantime, you might be interested in checking out this article –
18 KANNADA MOVIES THAT DESERVE A SEQUEL ASAP

14 Famous Hanuman Temples in Bangalore That You Must Visit