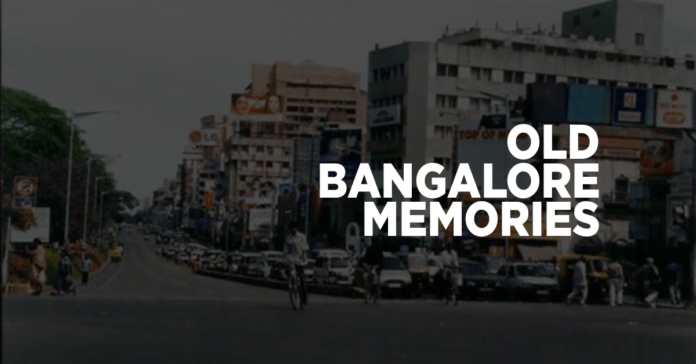 They say the charm of the city lies in the trees, plants, atmosphere, vegetation, and the most important aspect is in the culture. People who grew up in the 80s and 90s saw Bengaluru as heaven. It is very true and everyone would agree on this too.

Today the greenery around us is at stake in the name of development. Namma Bengaluru has seen rapid development when compared to any other city. Now the lakes are converted to tech parks, lands into real estate and highrise buildings. Further, the trees are cut down to construct flyovers and widen the roads, leaving less space for the pedestrians.

Bengaluru being as garden city with green canopy in most of the roads, now losing its charm and being renamed as IT and Startup city.

The major reason for the current situation is the unplanned growth of the IT industry. Well, here is Bengalurean who shares his experience about how life was before the IT revolution and his memories of growing in Bengaluru in the 80s and 90s.

Enjoy these few minutes of the nostalgic trip and get back routine work. Go ahead and read it.

1. School kids had to buy 2 sweaters with a uniform. Half sweater and full arm sweater. Without half a sweater, no one would even step out of the house. Further, the thumb rule was Strong n sturdy folks can wear a half sweater, the one who can get easily prone to cold should wear a full sweater.

2. One could reach any part of the city in 20 mins or maybe even less.

3. Moreover, train rides in Cubbon Park, visiting the bandstand in Cubbon Park and in addition to the joy of having candy or ice-cream after a giant wheel ride is unexplainable. These were considered “cool” activities to be done on Saturdays and Sundays. There was no concept of the weekend back then.

Must Read: 6 Sakkath Memories That Every 90s Kid Remembers About Namma Bengaluru

4. Almost, all roads were two way and I remember people were amazed when Avenue road was made one way back then. JC road was later made as one way, I guess.

5. If an area didn’t have enough trees, it was considered as outskirts or as a new extension. In short, trees were the benchmark for assessing the age of layout.

6. Airport was the end of the city. In fact, anything beyond the trinity circle was considered as Bangalore – Airport. The newspaper used to carry the temperature reading of Bangalore. Also, Most of the time, the airport used to be cooler by 1-2 deg when compared to the city. I was always jealous of it while reading the news and used to be happy when Bangalore city was cooler than the airport.

7. If there was a good Dr. Rajkumar movie playing on DD Kannada on Sunday evening, it could be considered a lean period for the business. Those were the days when marriage timings were adjusted so that people don’t miss Mahabharata serial.

8. Gobi Manchurian had just hit the menu of Bengaluru hotels. I still remember eating that dish and forcing my dad to order one every time we went to the restaurant.

9. We had red-colored BTS buses, Pusphak buses were considered as luxury, Double-decker bus on few routes, auto which had the engine in the front seat and everyone loved Premier Padmini, Ambassador, Fiat, Maruti 800, Contessa cars over Audi, Lamborghini.

Must Read: 13 Vintage 2 Wheelers That Ruled The Streets of Bangalore in the ’90s

10. Ganesha Festival, Annamma Devi festival, Kannada Rajyostava were celebrated with zeal. The first few hours of the morning were dedicated to bhakti geethe of BR chaya, Rathna Mala Prakash etc and later came the film songs. There were horn mics blowing out new numbers of Shiva Rajkumar movie or other sleazy numbers during the afternoon ensuring that no one sleeps in the vicinity of the pandal.

Evening time was reserved for Orchestra, drama, etc. Most of the people enjoyed it and none of them used to call cops stating sound disturbance. I wonder, have we lost that patience off late when we call cops even for slight sound in the colony.

The Outdoor Games During Our Childhood

11. Those days, kids used to play on the streets. Roads had minimal traffic and it was easy to play cricket. Playgrounds were used during summer time or holidays.

The power cut was most welcome since it would relieve us from studying or doing homework. As kids, we had lots of games to keep us engaged. Some of the popular games were Hide n Seek, Lagori, Goli, Chuu Chandu, Gilli Danddu, etc. Then came the era of WWF cards, Big babool cards, HE Man stickers, the fake tattoos which used to catch the attention of an average kid in Bengaluru.

12. “Naale Ba” ( translates to Come Tomorrow ) was found on almost every door of the middle-class household. It was a scare created in the 90s (at least in minds of kids) that some old lady (a witch) is roaming the streets of Bengaluru asking for water. If someone opens the door for her, then bad things would happen. So, everyone has this “Naale Ba” written on their doors for some years.