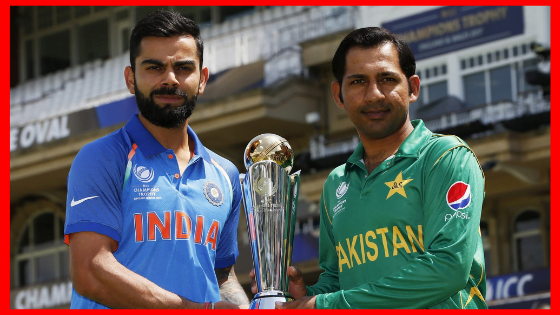 It’s time again for a much-anticipated match of ICC World Cup 2019 as we all know, it’s none other than India vs Pakistan.

To begin with, For most of us as cricket fans there are two types of matches, one is the regular one where India plays against South Africa, England, NZ, Bangladesh, etc. The other one is kind of an epic battle – between the two cricketing rivals, that is India vs Pakistan.

The clash between the two nations bears all the true emotions.

This includes only those World Cup Tournaments where India and Pakistan have faced each other.

In this ultimate cricketing rivalry, teams have faced each other 6 times in World Cup so far, Pakistan has never defeated India.

All we have to do is wait and watch as India takes on Pakistan on 16th June, Sunday at Old Trafford.

Hope the rain does not play a spoil sport again.

As the countdown begins, here is a quick rewind of those six matches where India faced Pakistan.

The first time when India faced Pakistan in World Cup was on 4 March 1992. The match took place in Sydney, Australia. India won the toss and elected to bat first. India had a put up a total of 216/7. Pakistan miserably failed to chase the total and was all out for 173.

Furthermore, A thumping victory for the Indians. Sachin Tendulkar was the man of the match for his half-century.

The match was on 9 March 1996 in Namma Bengaluru. The crowd at Chinnaswamy Stadium witnessed a great match. Here, India wins the toss again and elects to bat first. With a total of 287/8, Indian batsmen performed extremely well especially, Navjot Singh Sidhu who scored 93 runs.

Pakistan gave a tough fight but failed to chase the score. Henceforth, India wins the second time against Pakistan.

The match was held at Old Trafford on 8 June 1999. For the third consecutive time, India won the toss and elects to bat first. India scores 227/6 (50 overs) with a great performance by Jammy. Hats off to the Indian bowlers especially Venkatesh Prasad who took a 5 wicket haul and lead to an extraordinary victory for the team. Pakistan was bowled out for 180 runs.

In this case the man of the match was awarded to Venky aka Venkatesh Prasad.

Pakistan won the toss and elected to bat first. Furthermore, with a decent score on board, Pakistan put up a total of 273/7 (50 overs). India’s batting line up accepts the challenge, with Sachin Tendulkar’s 98 runs from 75 balls easily won the match for Indian with 5 overs left.

The match was on 1 March 2003 at Centurion Park, South Africa. Most Compelling performance by the Master Blaster. He was awarded the Man of the Match.

The team led by Captain Cool MS Dhoni selects to bat first by winning the toss. The team put a good total of 260/9 (50 overs). The match was held on 30 March 2011 at Mohali, India. The Pakistanis were bowled out 231 with one ball left. India won by 29 runs. In addition to this, India went on and won the World Cup this year.

A historic moment for us.

The match was on 15 February 2015 at Adelaide, Australia. India wins the toss and elects to bat. India put on a whopping score of 300 on the board. Already, a halfway through winning the match. Indian wins the match by 76 runs.

To sum it up, India has faced Pakistan Six times in the World Cup and have won one after the other with breaking the winning streak.

Here are a few interesting facts

India has won the toss and elected to bat first for 5 times. So this time will the toss be the crucial factor or a just blind belief.

It’s the second time, India is facing Pakistan at the same stadium in England. The first match was in the year 1999 and we all know the result.

Will the history repeat?

Do the math all by yourself, we have not triggered any thoughts. India is taking on Pakistan once again at the same stadium Old Trafford after 20 years.

12 Random Tweets About Monday That Are Hilarious AF!