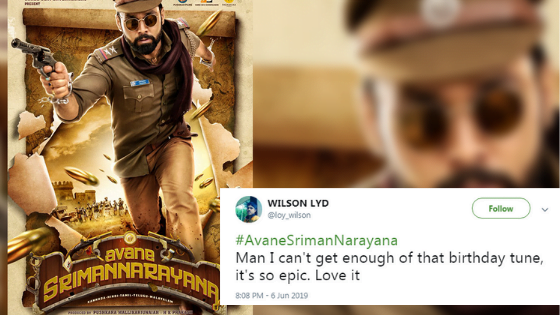 Avane Srimannarayana teaser 2 is out finally on the occasion of Rakshit Shetty’s birthday.

Happy Birthday to me!!

A fictional story about a corrupt police officer in a town ‘Amaravathi’, Karnataka set in the 1980s.

Furthermore, the film has got a famous and brilliant cinematographer Karm Chawla. The music and background score by Charan Raj and B. Ajaneesh Loknath.

This film has set a new record, being shot for 198 days and with 355 call sheets becomes the first film with the highest number of shooting call sheets in Kannada Film Industry.

The teaser was supposed to be out at 6pm.

Well, there was a bit delay in releasing the teaser. The fans were disappointed. Rakshit Shetty’s fans took Twitter to express their views.

Check out some of the Tweets all by yourself.

So, after all the wait

This is a ‘Magnum Opus’ in KFI for sure. The 2 mins 17 seconds teaser is mind-blowing and is lit. The quality of making is next level. The cinematography is just a treat for the eyes.

Interestingly, in this second teaser, Rakshit Shetty aka Srimannarayana is seen lighting a cigar and in the background the happy birthday tune. This scene is epic and makes you say wow.

Recommended Read: THE ‘PAILWAAN BOXING POSTER’ IS OUT & FANS ARE CELEBRATING

8 Moments From Weekend With Ramesh with Shri Dr. D.Veerendra Heggade