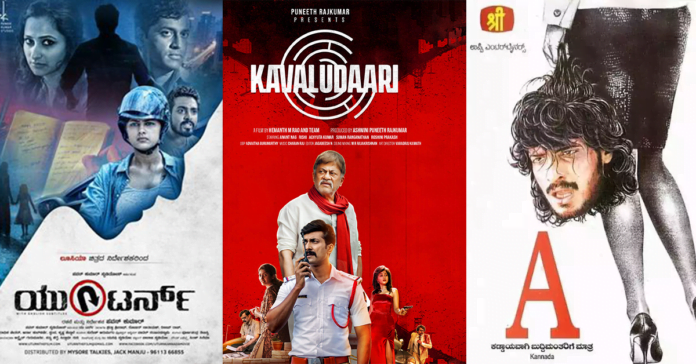 Are these your favourite genres ?? Looking to watch these genre movies in Kannada?

Are you a fan of these Hollywood directors – Christopher Nolan, Quentin Tarantino, Martin Scorsese movies to spice up your curiosity?

Then you must watch these 16 best Kannada movies, which belong to the same genres. These movies gave a new start & dimension to content-oriented movies in the Kannada film industry.

The movie revolves around two incidents, can be called a two-dimensional story which is narrated simultaneously and gradually become a single plot towards the end of the movie.

Mysterious events, A bit of horror in the screenplay, The story’s main plot is double road flyover. Streaming Now on Amazon Prime.

The story is adapted from Non-Fictional novel “Dadagiri Dinagalu” a real story of the dark underworld of Bangalore.

This film was critically acclaimed. The story revolves around human values, conflicts, Blind beliefs, dilemmas and tries to find a solution. A thought-provoking script.

The story is inspired by Bhagavad Gita, a story between life and death. Later the movie was remade to Telugu language in 2018 named “Aatagadaraa Siva” by Rockline Venkatesh which is streaming on Amazon Prime.

Soori is known for making intriguing, nail biting, roller coaster experience with his movies and what not. This is one such story where lovers run on their heels to escape from cops.

A completely new cast who has no prior experience in acting gives a spin for audiences keeping it so natural and very relatable, that’s how real people are in normal daily life. The Story is set in a remote village of Karnataka. Death of 101-year-old man and how their sons react to it.

The plot of this movie lies in this line “ Nee maayeyolago ninnolu maayeyo” means Are you a creature of illusion? Or illusion is your creation.

One incident, perspectives from different people to unfold the truth. Will you get to know the truth ?? It’s left to your imagination, you become the judge.

One of the best Kannada thriller movie.

A story of the character named “Angara”. But the twist is you get to see this character towards the end of the film.

An unusual love story. Flashback within a flashback with a reverse screenplay – this perfectly defines the story.

The story is all about Naanu(me). Perfect one-word description. A psychological thriller.

A man suffering Alzheimer’s disease goes missing and meets up with a criminal. What happens next you gotta watch the movie

We know many Kannada movies are not listed which are equally deserving. Comment on your favourite movies in this genre.

You’ll get to read that in next blog 🙂

So these are the top 16 Kannada movies that one should not miss watching, and the movie mentioned above is highly rated on IMBD and loved by people.