10 Fascinating Facts About Chamundi Hills That You Should Know 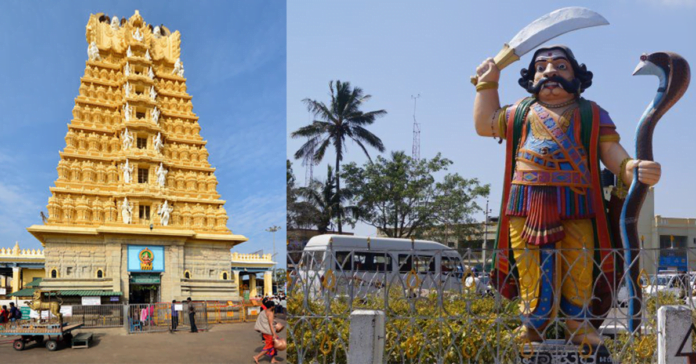 Chamundi hill, situated in Mysuru, Karnataka, is a natural wonder, and it carries with it the rich cultural heritage of the city and its beautiful landscape. It witnesses thousands of devotees visiting it daily, making it one of the busiest tourist attractions in Mysuru.

On the southeastern part of Mysuru, Chamundi Betta is a small hill with lush green vegetation. It houses a shrine where the people worship the Goddess Chamundeshwari or Durga, the warrior Goddess.

In mythology, the Mahabalachala hill is the actual name of the Chamundi hills.

One among the eighteen major Shakti Peetha, also known as Krouncha Peetha, Chamundi Hill is India’s most important sacred place.

4. The Story of Chamundi Hill

The temple has a quadrangle structure, and the original shrine is said to have been built in the 12th century by Hoysala rulers. The Rulers of the Vijayanagara Empire probably built the tower in the 17th century.

The Chamundeshwari Thayi sculpture inside of the temple’s sanctum is seated in a cross-legged yogic posture.

Chamundi Hill is an ancient Hindu shrine with about 1000 stone steps leading up to the 3000-foot summit of the hill.

At the 800th step stands the massive statue of Nandi, finely carved out of a single piece of granite. It is 4.9m tall and 7.6m long, with exquisite bells engraved around the neck.

An enormous statue of a demon once stood atop a hill in India. Chamundeshwari Thayi killed the monster, and the Goddess now resides on the mountain. Mahishasura Mardini, The Goddess, meaning She who slew Mahishasura.

The people of Karnataka worship the Goddess with reverence and devotion to date.

8. The Chamundi Hill and the Navratri Celebrations

On the seventh day of Navratri, The Mysuru Maharaja donates jelewry to decorate the Goddess Chamundi.

9. The Rich Biodiversity of the Chamundi Hill

Chamundi Hill is an exciting spot of biodiversity that has been a good locality for botanizing and a repository of medicinal herbs.

The temple is most famous for celebrating the festivals of Aashada Shukravara, Navaratri, and Ammanavara Vardhanthi. Aashada and fridays – is auspicious. In addition to this, Fridays are also a sacred and good day to visit the temple.

Mysuru celebrates Nadda Habba Dasara with a lot of grandeur. During the Navaratri festival, the Goddess is dressed up in nine different ways to symbolize various aspects of the Goddess.

We know that the history and culture behind this hill are fascinating, and we hope we’ve been able to bring it to you in this article. If you know more interesting facts, do let us know!

So when are you planning to visit this divine destination?