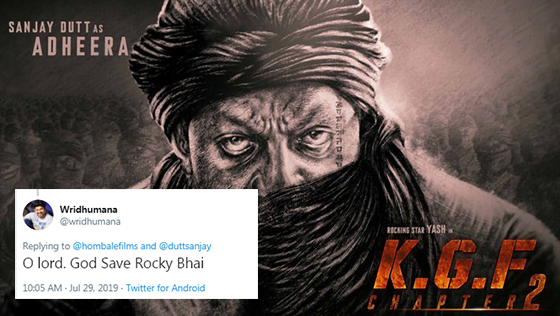 “But the fact that another person’s footsteps had fallen there… Nobody knew this”, This is still the first chapter… The story now is just the beginning. KGF CHAPTER 2

KGF is a Period – Action film was written and directed by Prashanth Neel, produced under the banner Hombale films starring The Rocking Star Yash, Srinidhi Shetty, Ananth Nag and list goes on – by the way it’s a huge star cast.

Chapter 1 is the highest-grossing Kannada film of all time. The movie has crossed 200 crore mark having released in 5 languages.

To begin with, KGF Chapter 2 is a sequel and also the shooting for this movie has gone on floors a few weeks back. As we all know the shooting is in progress and is going to bombard the screens in 2020 all over India.

Also, to be frank, many of us are still in the buzz of chapter 1, watching it on Amazon Prime without any count. Maybe not the full movie, but yes the massy scenes and the dialogues for sure.

Now the KFG chapter 2 is already stuck in people’s mind with huge expectations. To point out, there’s already huge speculation on social media regarding the star cast. Yes, it is true that Bollywood stars Sanjay Dutt and Raveena Tandon are part of Chapter 2.

In fact, the hashtag is trending on Twitter from the time makers have put out a hint of a big announcement.

Well, the time has finally come and the big announcement is the unveiling of the character “ADHEERA”.

A first look at Sanjay Dutt as Adheera in the film drops on his birthday. Also, his fans are excited to see him after a long time.

KGF Chapter 2 is going to be gigantic for sure. Sanjay Dutt along with Yash will be a treat to watch them on the big screen for both the fans.

A lot more official announcements, gossips regarding this movie are on the way. Check this space for more.

10 Sakkath Minimal Kannada Posters That You’ll See on the Net.

6 Interesting Facts About Mantralayam That One Must Know