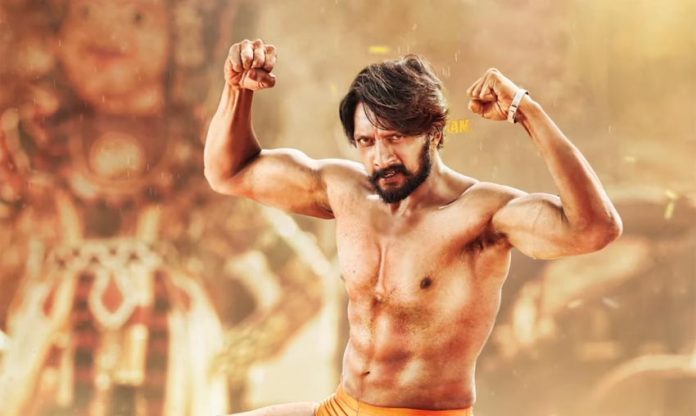 Right after the blockbuster Hebbuli, the duo has come together again for a power-packed sports-oriented flick. A challenging role for Kichcha Sudeep, as he will be appearing as a wrestler and also a boxer for the first time in this avatar.

Firstly, the movie is written and directed by the famous cinematographer of Kannada Film Industry S.Krishna. Also, he wears the producer’s cap under the banner RRR productions.

Right from the beginning, this movie has created a lot of buzz among the fans. Right from the poster to the teaser release. In addition to this, the teaser got the eyeballs of the pan India audience. From Salman Khan to Dhanush and various other celebrities from Bollywood to South Indian Film fraternity took Twitter to express their views on this film.

The expectations and excitement for this movie are increasing day by day. Even the lead actor made to news for his rigorous training under international boxing and wrestling professional trainers. Hats off to the actor for undergoing physical transformation to look apt for the character.

According to the team of Pailwaan, the movie will be released in five languages. Kannada, Telugu, Tamil, Hindi, and Malayalam.

Excited?? then, all you have to do is wait until the Pailwann is ready to take you down.

The movie is all set to release next month on September 12th, 2019.

The 1.53 min trailer looks massive and also the grandeur of the movie can be seen throughout the trailer.

The trailer starts with Sharath Lohitashwa voice-over dialogue ” One who fights to prove his strength is a Rowdy, One who fights for a strong cause is a Warrior”.

The background music is brilliant especially, the title song Pailwaan Pailwaan. Kichcha Sudeep’s entry and his rugged looks as Pailwaan is lit. In addition to this, the way he turns his mustache is a sakkath moment.

Seems like Suniel Shetty plays a prominent role in the film. Also, he seems to be training pailwaan in the trailer. Welcome to Sunil Shetty as he debut’s in Kannada Film Industry. Further, there are not many characters revealed in this trailer.

The visuals in the trailer are stunning. To sum it up, out and out a fantastic trailer. The excitement levels of the fans are high.

Hope the movie will be successful at the box office throughout all the languages.

Here is the trailer

The ‘Pailwaan Boxing Poster’ Is Out & Fans Are Celebrating

11 Tweets You Should Read Before Booking Your Tickets For ‘Kavaludaari’