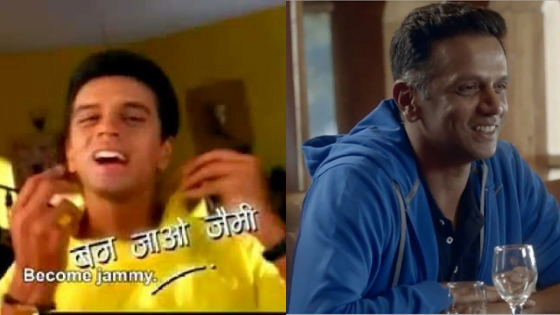 These commercials in which Rahul Dravid appears will surely take you guys down the memory lane.

Jammy, Mr. Dependable, and The Wall. This Man needs no introduction.

Rahul Dravid is a god damn treasure for sure. One of the best batsmen in the history of cricket, he has been a class apart on the field. Furthermore, his humility won the hearts of millions of people off the field too.

It is because of Rahul Dravid’s Clean Image, His Values, Calm and Composed Nature, Unique Style, and a huge fan following throughout the nation has made him the most bankable face for brands even today.

Till date he is a part of Tobacco Control Campaign.

Over the years Jammy has endorsed various popular brands such as Pepsi, Google Pixel, Gillette and others.

Here are some of them

Rahul Dravid’s Appearances In These Iconic Commercials Are Super Fun!

How many of you guys remember this ad??

Do you guys know why Rahul Dravid is called Jammy??

Well here is the reason

Mr. Rahul Dravid got the nickname ‘Jammy’ due to his love for jams and also for the fact that his father used to work at Kissan Jam Factory. Interestingly, Jammy got an opportunity to endorse Kissan Jam.

Good to know fact – There’s even a local school tournament named after him. The Jammy Cup held in Namma Bengaluru and the man of the match gets the title as “Jammy of the Day”

Let’s end it with this one.

How many of you guys remember these commercials?? Do let us know, Comment down!