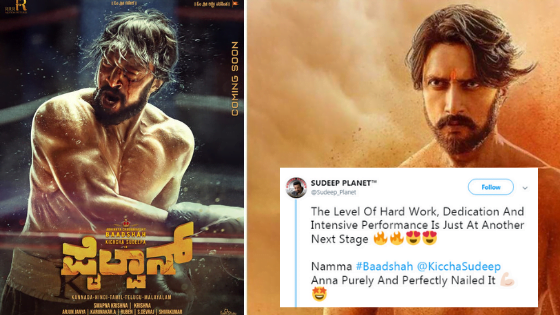 The Pailwaan Boxing Poster hashtag is trending on Twitter. Kichcha Sudeep’s next flick Pailwan is all set to take over social media by storm as the film’s new poster is out.

Right from the announcement, the movie is creating a lot of buzz as the duo as joined in for the second time. After the blockbuster ‘Hebbuli’ director, Krishna and Kichcha Sudeep are all ready for their power-packed spots flick ‘Pailwaan’.

The teaser created a lot of buzz on the Internet. The interesting fact is that Bollywood actor Mr. Suniel Shetty makes his Sandalwood debut. From Salman Khan to Dhanush and various other noted celebrities from Bollywood to South industry took Twitter to express their views on the teaser.

This trend is happening again as the ‘Pailwaan Boxing Poster’ is out. The famous celebrities such as Mega Star Chiranjeevi, Mohanlal, Vijaysethupati, Suniel Shetty and Kichcha Sudeep released in their respective languages.

Here Is The ‘Pailwaan Boxing Poster’

This poster is so intense, sure this poster makes fans go crazy. Killer looks of a Real Pailwaan. Especially the expectations are going to skyrocket. A big responsibility on the team to meet the audience expectations.

Anticipate Pailwaan is going to make a big impact throughout India after KGF.

The film is releasing in 5 languages Kannada, Telugu, Tamil, Malayalam, and Hindi.

11 Tweets You Should Read Before Booking Your Tickets For ‘Kavaludaari’