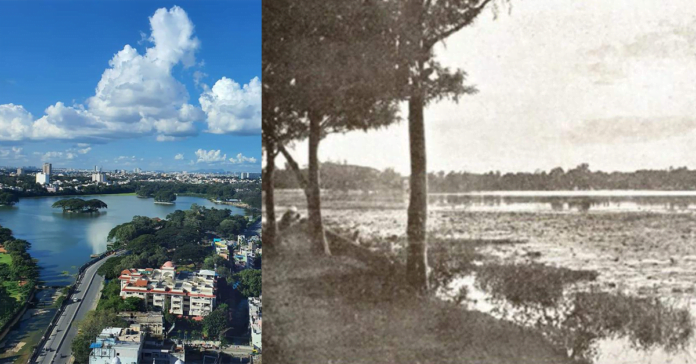 Open to the sky, with water all around, flowing at its center. Not many lakes in the world possess this unique geometry, but Ulsoor lake is one of them. It is one of the oldest lakes present in this city. This reason has made it a fantastic place to visit in Bengaluru.

This lush green lake is one of the most scenic spots in the city. It’s a lovely place to relax and enjoy a nice view. In addition to this, a favorite hangout spot for Bengaluru locals.

There is a swimming pool, a big park on the lake, and the other part has a walking track. The Ulsoor Lake has always attracted people to spend evenings or days around it.

People engaging in jogging/walking around it in the early mornings are a common sight here. This lake is always peaceful, and even there are hundreds of visitors walking around the track throughout the day.

Here are a few interesting facts about the Ulsooru lake which you might not know.

Many believe that King Kempe Gowda has created the Ulsoor Lake during the latter half of the second century. In ancient times, this lake was famous as the ‘Halsur’ or ‘Alasur’ lake.

2. The Interesting story Around Ulsoor Lake

Kempe Gowda, the founder of Bengaluru, was tired while traveling from Yelahanka to Bendakaluru (in present-day Bengaluru) and decided to rest under a tree. It was the same tree under which Mandava Rishi is believed to have worshipped God Someswara.

The great Kempe Gowda dreamed that God Someswara appeared to him and told him about a hidden treasure. This dream led Kempe Gowda to discover the treasure, using which he built the famous Halasuru Someswara temple.

The Ulsoor lake is the oldest natural delight of Bengaluru, spread across 123.6-acres. The lake has added to the heritage value of the city’s greenery, culture.

Only lake in Bengaluru, which has multiple islands.

Ulsoor Lake is a must-see for bird watchers! You can watch countless species of birds in their natural habitat. It might be overwhelming to observe the numerous species of butterflies and insects in one location, but it’s fascinating!

The present lake was created much later by Sir Lewin Bentham Bowring, the then Commissioner of Bangalore.

We hope you enjoyed reading about these facts about Ulsoor/ Halasuru Lake. Do tag us @superrlife_ on Instagram when you visit the lake next time.