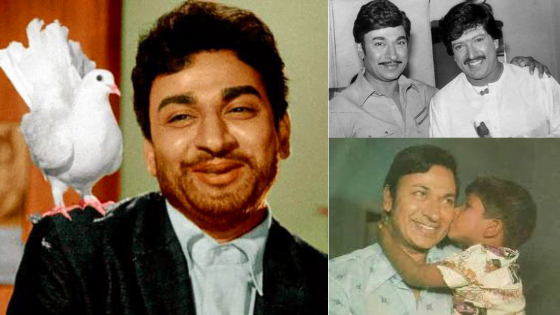 Popularly adored as Nata Sarvabhouma, Bangarada Manushya, Vara Nata, and Rajanna – Dr. Rajkumar. The legendary actor is a recipient of the Padma Bhushan and the Dadasaheb Phalke Award for the lifetime contribution to Indian cinema.

Remembering Annavru on the birth anniversary. One among the versatile actors that Indian cinema has witnessed. Born on April 24th, 1929 as Ambrish Singanalluru Puttaswamayya Muthuraju, renamed as Rajkumar for his on-screen image.

The only actor to receive the National Awards for both acting and singing. With a profession traversing more than four decades and 200 movies, and nearly singing for 300 songs make him a idol for many of us.

On April 26th, 2006, Annavaru passed away. This set off an overflowing of sorrow among the people of Karnataka. There was a real shutdown in the city of Bengaluru.
An unofficial bandh was observed.

Remembering him on his birth anniversary, here are 13 Rare Images of the Legendary Actor Dr. Rajkumar

6. Dr. Rajkumar Receiving a Award from the President

The larger-than-life personality, Mr. Raj’s legacy lives on for the generations of Indian cinema.