5 Reasons Why We All Love Bengaluru FC – The Coolest Club 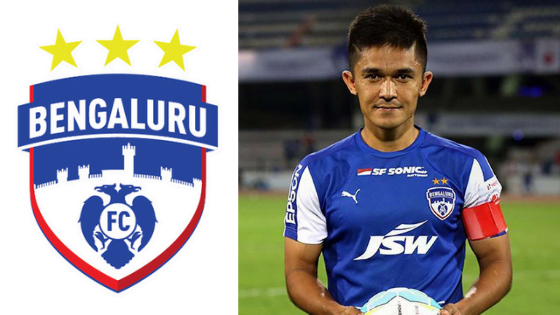 To begin with, we would like to call it a young football club with a young vibe.

Bengaluru FC has won the hearts of Namma Bengaluru. Also gained thousands of loyal fans all over India.

The Charismatic Coach, The International Skipper. In addition to this, creating history by winning I-league in its debut session and also winning so many trophies.

Bengaluru FC has it all and has become the coolest football club in India in a quick span of time.

Since the formation, the Bengaluru FC has Three League Titles, Two Federation Cup Titles and, a Super Cup Champion.

Above all have you ever experienced the Bengaluru FC match at the stadium???

It’s always “BFC” “BFC”, “Chhetri” “Chhetri!”, the chants from the crowd echo’s throughout the stadium.

One shouldn’t miss this experience!

Here are the 5 Reasons Why We All Love Bengaluru FC

1. The Man Himself – Sunil Chhetri

What else do we want ??? The skipper of the Indian National Team is a part of the club. His style and elegance on the field is a treat to watch.

The love between the club and the fans is so real and awesome. Furthermore, the 3500 seater block is always sold out. The dress code is ‘All Blue’. Especially on the match days – the Sree Kanteerava Stadium is one of the most happening places in Namma Bengaluru.

The West Block is filled with passionate fans chanting and cheering their team which adds up to the atmosphere. To experience it, you have to be there with the loyal blue army.

It’s very interesting that BFC has attracted a huge number of female fans. To summarize this, in 2016 the club started a campaign to celebrate strong women with the hashtag #WomenofSteel.

By the way, the fans are given a unique opportunity to volunteer on the match day. The club invites nominations to be the part of the club during the seasons to volunteer them on the store, ticket sales, media support, and hospitality, etc.

The culture is very inspiring especially to empower women. The club, staff are fan-friendly. In an attempt to increase the reach of the football culture in India, the club conducts seminars in schools, colleges, also interact with the young crowd at youth festivals, initiating powerful campaigns. This initiative is appealing.

In conclusion, as long as they have the fans support, the only way for the blues is to march forward without looking back.