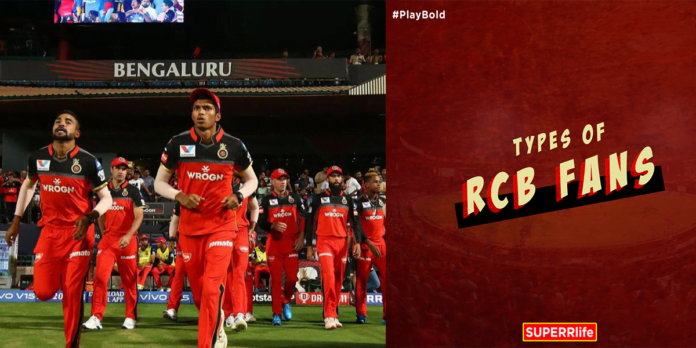 RCB RCB RCB this is what you hear in a jam-packed stadium, the crowd going crazy in stadium, pubs, social media. We bet you would have come across these types of RCB fans in your life, especially in Bangalore. Read on!

This team has the most loyal fans in comparison to other IPL teams. The fans are so awesome.

And you can’t just figure it out.

It’s not easy being a die-hard RCB fan. Besides not winning the IPL trophy – the fans have been consistently supporting them every other season. In addition to this, fans are increasing year by year and but haven’t stopped cheering for RCB.

Have you wondered the reason behind the craze of RCB?

At times fans are disheartened seeing a team with such a high potential not performing. Likewise, the team has lost quite some matches from the winning positions. That’s even more disheartening.

As fans we’ve all been there.

Well in this context, over the last 11 seasons, you would have met at least one among these types of RCB fans.

9 Types of RCB Fans That You’ll Come Across, Especially During IPL Season

The Nags antics!! Social media has gone crazy over MR. Nags the Peas maker. Also hilarious to the brim. The RCB Insider Show has got a separate fan base. People Loves(In Nags Estyle) RCB only because of the entertainment.

These both are the backbone of the RCB team especially when it comes to scoring these guys have the record in their name for RCB. ABD is a different class. Virat is the run machine. People love to watch these 2 guys play for RCB. Hence the fans are also class apart.

To begin with, A RCB fan is also a true MSD fan. Many fans support CSK, the only reason is due to MSD. When it comes down to a match between RCB and CSK, even RCB fans love to watch MSD play, conversely want RCB to win the match. We all have come across them. Even I have friends who fall in this category.

Haven’t you used this hashtag?? We all have used it, right. But the addicts have this special power to use it on all the social media post which are not even relevant to RCB. They deserve to get a #ESCN Addict badge.

By the way, no one knows who coined this term but Bangaloreans have gone mad over it. A big thanks to social media.

Special Award Kodro Firstu Evarige. Generally, these guys support even after the IPL season is over. They try and attach RCB to everything possible throughout the rest of the year which gets irritated. Hope you stay away from them after the season.

The Phares you hear when RCB loses are created by the defenders and save everyone during the tough times in front of other team fans. For instance
First Match Devrige, Nave Beku Beku Antha Bitkotvi, you might have also heard others too. Do comment and let us know.

Maybe this year! Maybe next! Who knows. All we can do is pray and hope that the cup will be lifted by Kohli and the team one fine day. Thus HOPE is the only thing taking us forward.

“Hope is a good thing maybe one of the best things and good things never die”.

To begin with, these guys love to bet on RCB in spite of bad performance. If others ask them why – they have this unique answer Devra mele bhaara haakbitidini, guru nodana.

These people make time to watch the RCB match only when the team wears a green jersey. You’ll find them only on social media and that too in the comments section. For instance, they are the first person to comment asking when are RCB wearing a Green jersey.