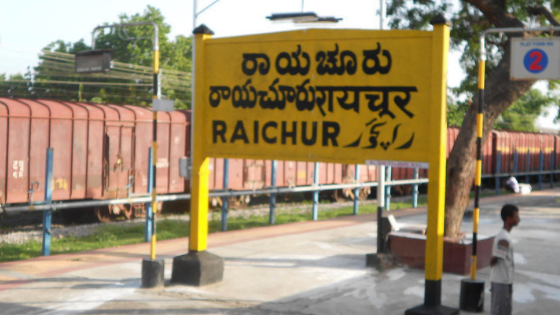 Raichur is referred to as the cultural kaleidoscope of Karnataka. It has a rich history over the centuries and has been part of many empires such as Mayuras, Chalukyas, and the Vijayanagara Kings. During Bahamani Sulthan, it was renamed as Ferozenagar, but however people continue to call the city by its old name.

Raichur is famous for the stone inscriptions, age-old relics, artifacts, ruins of the huge fort, and old temples. The common languages spoken here are Kannada, Urdu, and Telugu.

Today, A headquarter as well as a commercial, industrial and educational center. Famous for its production of rice, cotton, and oilseeds.

India’s largest gold deposit in Karnataka after Kolar Gold Fields. Hutti Gold Mines Limited is the only company in India that produces gold by mining and processing the gold ore.

2. Land between the Rivers

Situated on the banks of two rivers. Towards the south, there is the Tungabhadra River and to the north is the Krishna River.

3. The Only Active Gold Mine is in Namma Raichur

After the closure of Kolar Gold Fields in 2001, Hutti Gold Mine is India’s One and Only Active Gold Mining Site.

The Fort was constructed by Queen Rudrama Devi’s minister during the rule of the Vijayanagar Empire in 1294 AD.

5. One of the Largest Cotton Exporter in Karnataka.

Cotton is exported all over India.

6. The Power House of Karnataka.

These two power stations supplies electricity to major parts of Karnataka and other states.

The mouth watering Vaggani – Mirchi is famous. One must try it out if your heading to raichur.

8. Raichur is the Commercial Center on the Central Railways

Raichur railway station can connect to almost all parts of India. There are trains from Raichur to Bangalore, Chennai, Hyderabad, Mumbai, Solapur, Pune, and even Delhi. Mumbai to Trivandrum, Mumbai to Kanyakumari via Raichur, and many more.

Located just 35 km from the city, the famous statute of Lord Hanuman with five face on a hill rock.

Are you proud of being a Native Rachurian??

Comment down and do let us know your memories.

Spread a word among your friends by sharing this article.