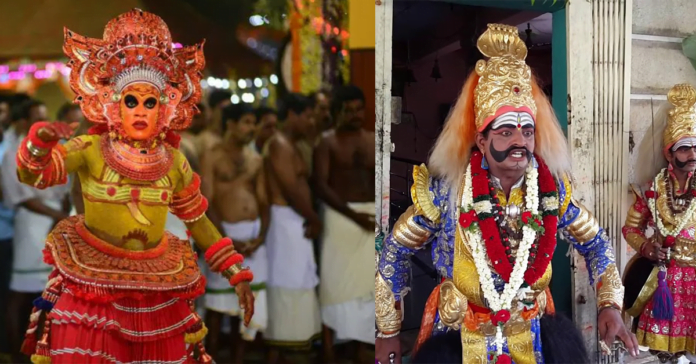 Karnataka, one of India’s several states, has significantly contributed to Indian culture. The influence of Karnataka has moulded the cultural worldview of India. The various famous dances of Karnataka that have their origins in the state are one of the most important forms that the world witnesses today.

Karnataka has a rich tradition of arts, such as folk dance, puppetry and many more. In this context, here are seven famous dances of Karnataka.

Dollu Kunitha is a popular form of folk dance in Karnataka. Its primarily performed by men and women from the Kuruba community in Uttara Karnataka. The group consists of 16 dancers, each wearing a drum and playing various rhythms while dancing. A leader directs the beat, which includes cymbals in the centre. Slow and fast rhythms alternate and the ensemble weaves a unique pattern. The costumes are simple: the upper body is usually bare, and a black sheet covers the dhoti on the lower body. In 1987, a troupe led by K. S. Haridas Bhat performed in Moscow, Leningrad, Vyborg, Arkhangelsk, Pskov, Murmansk, Tashkent, and Novograd.

One of the most popular dances in Karnataka among the Kodava community.

Kodava men perform in front of an oil lamp in an open field. While performing this dance, the men hold Chiavari (yak fur) and a Kodava short sword (odi-Kathi) in the other. Regional variations of this dance exist, in which performers use the Chiavari rather than the short sword. When the odi-Kathi is used, the dance is known as kattiyaata. The dudi, an hourglass-shaped drum, provides the rhythm.

This dance style is popular in uttara Kannada. Bhootha Aradhane (Gana) worship involves an idol procession with drums and firecrackers. At the end of the parade, a dancer dressed as a bhoota (holy spirit) circles the plinth with a sword. The dancer moves quickly and then slowly, indicating that he has attained divinity.

Various rituals of serpent worship are practiced throughout India, including Nagamandala in Karnataka. In Southern Karnataka, this lengthy ceremony lasts for the entire night and includes ritualistic appeasement of the serpent. Nagamandala serpents are considered an emblem of fertility and a form of life force in Karnataka.

Veeragase is a dance form popular in the Indian state of Karnataka. Jangama performs energy-sapping dance movements very intensely in this vigorous dance based on Hindu mythology. During the Dasara procession in Mysore and the Hindu months of Shravana and Karthika masa, Veeragase is performed. A significant celebration in all critical Lingayat household functions.

7. Yakshagana – One of the Most Famous Dances of Karnataka