The Football Stadiums in Bangalore 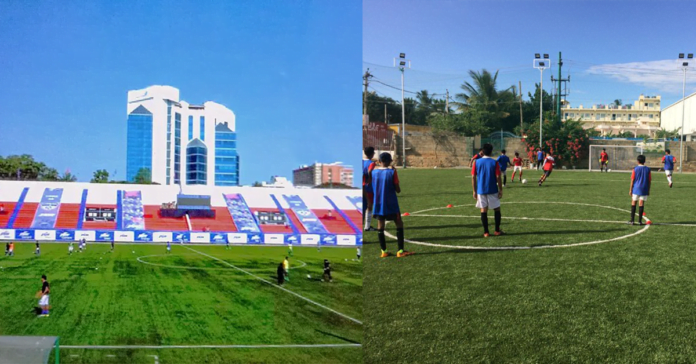 In this city, you’ll find a multitude of sports academies and stadiums. Sports personalities like Rahul Dravid, Sunil Chetri, and Anil Kumble and clubs like RCB and BFC call this city home. Bengaluru FC’s establishment in 2013 brought much-needed Indian football to a city that had been short of it for years. There is a good footballing culture in Bengaluru because of Bengaluru FC. The home ground for Bengaluru FC is Sri Kanteerava Stadium. Including this one, there are three other football stadiums in Bangalore.

The Football Stadiums in Bangalore

One of the Prominent Football Stadiums in Bangalore.

Bangalore’s center of football activity. On one of the oldest fields, most football players have played their entire careers on this field, where they have won many competitions and participated in games at the state and national levels.

A multi-use stadium in Bengaluru, India, Sree Kanteerava Outdoor Stadium was before known as Sampangi Stadium and was constructed in 1946. It contains a football field, volleyball court, running track, and two outdoor rock climbing walls. The Department of Youth Empowerment and Sports of the Government of Karnataka is the stadium’s owner. It is the most well-known sports complex in Bangalore. Bengaluru FC called it home for one season during which they won the I-League title for the first time. It served as a venue for three seasons of the I-League, the top-tier football league in the nation.

13 Olympians are among the talented football players from Karnataka who have represented India at the highest level. Through the establishment of teams like Bengaluru FC, who not only won the Indian championship but also brought honor to their state, city and nation through their accomplishments in the Asian Leagues, the sport has seen a resurgence of interest during the past five years.

Today, Karnataka is one of the states with the most registered football clubs in the nation, with over 350 clubs spread across the districts.