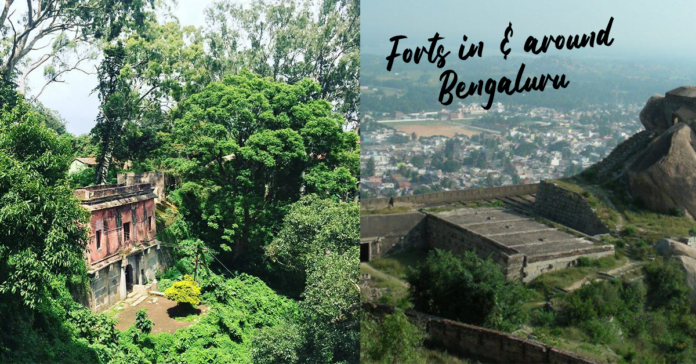 If you’re looking to experience a fantastic view, go on an adventure/trekking, and learn about history, visiting forts in Bangalore is ideal. One of India’s most popular cities, Bengaluru, is a mix of history, culture and inclusiveness.

12 Forts in Bangalore that You Shouldn’t Miss

The Bangalore Fort is a beautiful place with a long, rich history. It started as a mud fort built in 1537 by Kempe Gowda 1, of the Vijaynagar Empire and the founder of Bangalore. Hyder Ali later replaced the mud fort with a stone fort in 1761; his son Tipu Sultan then further improved this stone fort in the late 18th century.

Tourist attraction in namma Bangalore. Tipu Sultan’s summer palace used Indo-Islamic architecture style and was built within the walls of the Bangalore Fort, which his father Hyder Ali began building. Tipu Sultan completed the fort during his reign in 1791. The summer palace is now a museum that houses artefacts from Tipu’s era.

Constructed by Mallabaire Gowda, Devanahalli Fort is a historic site built in 1732. Located within the fort’s premises are Nanjundeshwara Temple, Tipu Sultan’s birthplace, and a dewan’s house.

The fort was once called Anandagiri during the rule of the Chola dynasty. Tipu Sultan built the fort and used it during summers. You can find the ruins of the fort, and also people visit to enjoy scenic views of the hills and for treks.

Recommended Read: Waterfalls near Bangalore within 100 km Perfect for a Weekend Getaway!

You can see the Nandi Hills and Kanivenarayanapura from the fort. Each Saturday, people gather there to perform pooja. The trek to the fort is a workout, but the view from the top makes it worthwhile.

Located away from Bangalore’s city limits, the Huliyur Durga is a fort on a mountain with a peculiar shape (Shaped like a cup).

The fort here is believed to have been constructed by Kempe Gowda I. The climb up to the fort is tricky as significant portions of the fort lie in ruins. Many come here to trek on the weekends and gaze at the lovely scenery from the fort.

The Marathas built the seven-storey fort of Channarayana Durga—a complex structure. Although in ruins today, the fort is a must-see for anyone who appreciates architecture and sculpture from ancient India.

The town of Madhugiri is a single hill and the second largest monolith in entire Asia. It is 100 kilometres from Bangalore, famous for its fort and temples built by the Vijayanagar Dynasty. Many tourists visit Madhugiri to see the fort, famous for its architecture.

If you’re looking for a beautiful hike, Makalidurga is the place to go. The fort is 60 km from Bengaluru and 10 km after Doddaballapura on Gauribidanur.

The fort at the summit has an old temple of Shiva with Nandi, and also there is a story of the legend, Markandeya Rishi performing penance here.

The oldest known reference to the city’s name—Bengaluru—can be found here. The fort is 3 kilometres (1.9 miles) off the more popular 1,200-year-old Naganantheshwara Temple, which features classic references to Chola architecture and art.

One of the hilltop forts is a favourite trek for locals. The strange name comes from the wife of one of the leaders. The fort has survived many centuries, and it holds a lot of stone structures and walls.

This fort in Bangalore is a forgotten relic of the city’s past. The fort has wooden and stone walls surrounding a pond and a Hanuman temple built in the 1800s. The architecture of these structures offers a mix of various eras, and the fort fell into ruin centuries ago.