15 Things Bangalore Is Famous for and You Must Experience Them At Least Once. 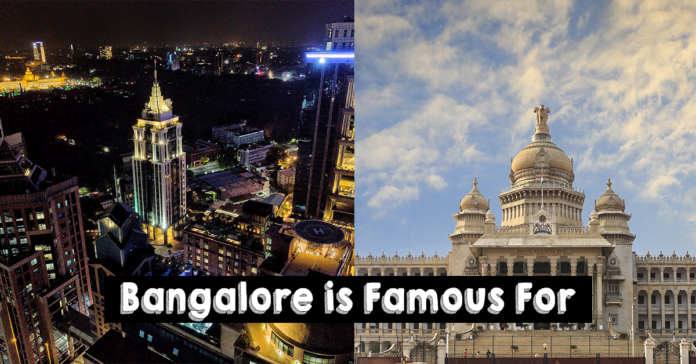 Bangalore is India’s startup capital. It is also known as the Silicon Valley of India. Bangalore’s landmarks like the Ulsoor Lake, the Vidhana Soudha, the majestic buildings, or rich architecture tell the city’s rich history. This city offers something for everyone, from the exotic local cuisine to the wonderful art and literature festivals. Here is our pick for 15 things that Bangalore is famous for, and you must experience them at least once.

If you haven’t tasted Kaima Curry and biryanis from Bengaluru’s military hotels, then you haven’t lived. They’re the best ones we can think of, and we’d put our money on them.

There’s a long history of military hotels in Bengaluru. It dates back to the 17th century. A must-try if you love experimenting with food.

2. The Festivals of the City

Although Bangalore is filled with people from various parts of the country and those drawn to its modernized appeal, it also has a rich cultural background that festivals can best describe as traditional. Here festivals are celebrated in the city with great magnitude. Ugadi, Nada Habba Dasara, Ganesha Habba, Makara Sankranti, Deepavali, Maha Shivaratri, VaraMahalakshmi Habba.

Apart from these, few festivals are exclusively celebrated only here in Bengaluru. It is a must to participate in the grandeur – Kadlekayi Parshe(GroundNut festival), Bengaluru Karaga, Ooru Habbas, Kannada Rajyotsava.

The RCB’s home ground is filled with exuberant loyal fans. They cheer with every hit and boo every time the opposition makes a mistake, and a loud howl is heard across the stadium when a wicket is taken! The stadium has a vibrancy about itself that keeps everyone energized all the time. A must experience if you are an IPL fan.

Recommended Read – Types of RCB fans – must check it out now!

Not only known as Silicon Valley, but Bangalore is also famous for its defense establishments in the city. The air show began in 1996. The Aero India show is hosted annually in Bengaluru, and thousands of visitors come to see the major exercises by military airplanes, helicopters, and other machinery. This show is special because it is the only event that commemorates India, Russia, the USA, Sweden, France, and other countries.

Namma Bengaluru(namma means ours) is a term used to refer to the city of Bangalore in the local language, Kannada. The term Namma has been used in mainstream Kannada pop culture, appearing in movies and songs by well-known artists. The phrase was used as the name of the Bangalore Metro.

Bangalore is famous for its innovations and inventions. One such invention is called Rava idli. Rava idli is made using semolina, which is an alternative to rice. It is an innovative recipe that came into being when the restaurant chain MTR of Bangalore invented it during World War II when rice was in short supply. Since its invention, Rava idli has become very popular in South India, particularly in namma Bengaluru.

Simplicity lies in the air when you are in Bangalore; darshinis is the perfect example. Just name any area, street you’ll find a darshini. In 1983 inspired by the fast-food chains abroad, it is the perfect place for a simple quick morning breakfast with namma ooru’s favorite filter kaapi.

Bangaloreans have been gulping fresh beer from portable pitchers for many decades. The city boasts many pubs of different kinds, which makes it a very exciting. Bangalore is also famous for being home to some of the purest and innovative breweries in India. The pub capital of India is the headquarters of great Indian brewing companies. Here are the few companies  UB, Khodays, Amruth – The Bengaluru whisky.

It is also referred to as Chandavana or KFI Kannada film industry. The industry from which the magnum opus the KGF chapter 1 was witnessed by millions of people. The Sandalwood industry can be termed as before and after KGF. This film made the Kannada film industry create an impact and open up new and exciting opportunities.

Bangalore is a hub for buying and those who love to shop. The fact that it has been so famous for street shopping as well as regular high street shopping makes it even better!

Bangalore is a dreamland for street shoppers. Narrow roads, crowded, perfect cardio for fitness enthusiasts, and affordable too.

Bangaloreans are said to be the friendliest and most welcoming people in India, so once you visit Bangalore, keep an eye open for some friendly locals who want to get to know you better! The people of Bangalore are very welcoming and polite in nature. Referred as Vishala Hrudayadavaru in Kannada.

13.  The Theatre Culture of Namma City

These days, Bengaluru’s theatre scene isn’t the same as it used to be years ago. Plays are performed in various spaces and theatres, and many people who would never usually go to the theatre come to watch these performances. Whether it’s a comedy, horror or experimental play you’re looking for, there is something for everyone at this time.

Bangalore is famous for greenery, hence the name Garden city of India. During British rule in India, a large number of trees were planted, and Bengaluru became well known for its greenery. It earned itself the nickname.

The popular parks and gardens in namma Bengaluru are Lal Bagh, Lumbini Gardens, Bannerghatta National park, Bugle rock, Krishna Rao Park, and Cubbon Park. The parks play a vital role in keeping the health and well-being of its inhabitants, and it upholds the Garden City’s reputation.

The city of Bangalore is well known for being one of the IT hubs in India. Many foreign corporations have their headquarters here, but that’s not all. This city is also home to many successful Indian tech startups. There s buzz that the name should be changed to TecHalli instead of Silicon Valley.

So what are you waiting for, it’s time to experience the vibes of namma city? Get Bangalored!