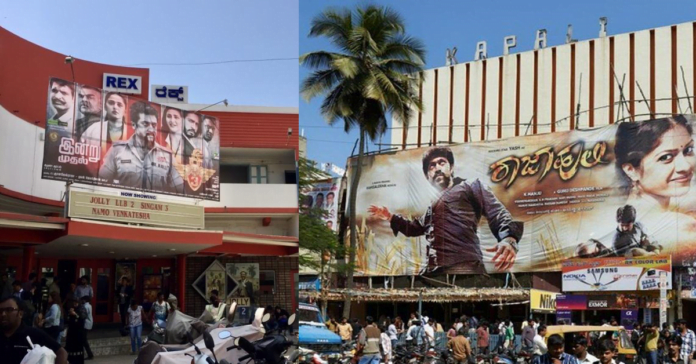 When you think of movie theatres in Bangalore, a single screen is probably the first thing that comes to mind for native Bengalureans. Back in the day, single screens dominated the city during the 1990s. In the 2000s, the city witnessed a slow rise of multiplexes. And now, it’s undeniably the end of an era, with multiplexes and malls dominating Bengaluru.

But there’s something special about the old single-screen theatres that dot Bengaluru. You can still find them around town—they look different now. While these multi-screen cinemas have become a thing of the past, we’re still nostalgic about our local movie theatres in Bangalore—the ones with their unique ambiance, charm, and memories.

Where people used to swarm to see their favorite movies is now the foundation of the MG Road metro station. The theatre opened in 1936 and closed its doors in 2005. There were ties between MGM Studios and Paramount Pictures and this theatre. The Ten Commandments successfully screened for 44 weeks and had the longest run at the box office.

In Bengaluru, Rex Theatre was a local favorite. In the 1930s, the theatre started showing motion pictures. Additionally, the theatre partnered with Columbia Pictures and 20th Century Fox.

3. Kapali Theatre – One of the Biggest Movie Theatres in Bangalore Back Then

This theatre near Majestic, operating for 49 years, has shown the most films with Dr. Rajkumar and Ravichandran. It was getting Kapali Theatre to show your movies that used to be a pride back then! This was one of Asia’s biggest movie theatres, with 1112 seats available.

4. Nataraj Theatre – Second Largest Movie Theatres in Bangalore Back Then

The Nataraj Theatre, Bengaluru’s second-largest theatre after Kapali, had a seating capacity of 1100 people. Vikram Vedha, starring R. Madhavan and showing at the theatre that was a favorite among Bengaluru moviegoers for more than 40 years, ended up being the last film to be shown there.

One of the theatres on Kempe Gowda Road was the Sagar Theatre. Gandhinagar’s most renowned single screen made its way to Pothys shopping mall. Mynaa was the last movie here.

This theater opened in 1971 and showed current blockbusters like Hello Dolly and Enter the Dragon. This, however, was only a temporary situation because audiences soon began to prefer watching television as a result of poor maintenance.

In 1959, the building that now serves as the Samsung Opera House at Brigade Road and Residency Road was a movie theatre. The once-dominant Opera House closed down due to legal issues and was later used as a cinema hall after independence did not last long enough.

In the 1970s and 1980s, this cozy theatre was a must-see venue. This theatre would show small, intense films that other theatres didn’t have room for. To build a shopping arcade, the theatre closed its doors in 1994.

In an era where theatres are either being converted to multiplexes or are facing closure, there are few single screens in the city that carry forward the charm of the good old days.

So, which was your favorite theater? Could you share your memories with us? Please add any that we may have forgotten in the comments section below.