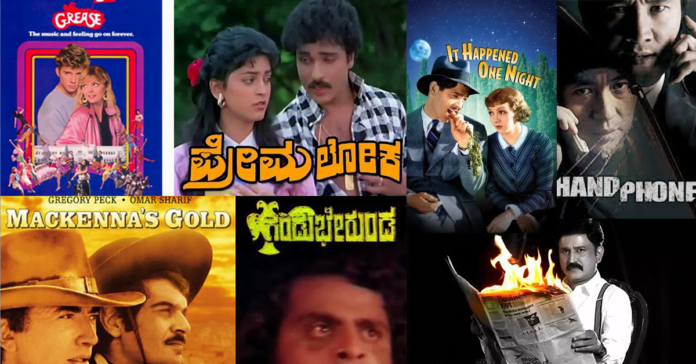 Did you know this? Few of our Kannada movies are inspired/remakes of Hollywood/Korean movies. The word “inspiration” got popular among the Kannada cinema lovers from the movie Simple Agi Ondh Love Story’s dialogue by Rakshith Shetty. Some movies are genuinely inspired, others are scene-to-scene copy of international films, and some are changed to suit our nativity with the same plot. Here are Kannada movies inspired/remakes of Hollywood movies.

This courtroom drama, directed by MG Srinivas and released on Amazon Prime during the lockdown, was a remake of a Korean movie called New Trail. It took on the story of a man accused of murder and his lawyer’s attempts to prove his innocence.

The audience loved the film. It is heavily inspired by Agatha Christie’s Murder on the Orient Express (2017). The sequel for this movie is announced, and Shivaji Surathkal will be back to solve another case.

Recommended Read – Check out more articles on our Entertainment feed!

Chingari is a remake of the French-English action thriller movie Taken, starring Liam Neeson. The Kannada version is directed by Harsha and stars Challenging Star Darshan in the lead role.

The movie was adapted from the successful Telugu film Darling. The first half of the Kannada version drew inspiration from the comedy English movie 50 First Dates.

It is said that the story of this movie is similar to the Kannada movie Ganeshana Galate, which itself was based on British movie The Odd Job.

The film is similar to the 2010 Hollywood film Shutter Island.

Dinesh babu’s 2008 comedy film, in which Komal plays the lead, is based on the French comedy Le Dîner de Cons, also known as The Dinner Table.

The famous song ‘Stylo Stylo’ is even popular to date. Hudugaata is a film starring Ganesh and Rekha Vedavyas. It is based on the 1934 American film It Happened One Night.

The movie is a remake of the 1961 movie Lover Come Back.

The 2015 Canadian movie Wrecker inspired the movie’s second half.

Ravichandran’s 1987 bilingual romantic musical film, based on the 1982 film Grease 2, was written and directed by the director in his directorial debut.

It is a remake of the 2011 Telugu movie Dookudu, which was inspired by the 2003 German movie GoodBye, Lenin!.

The movie is said to have been inspired by the 2009 Korean movie Handphone.

The film is a remake of the 2013 South Korean movie Miracle in Cell No. 7, based on a true story.

The movie speaks to the burden of war on a soldier’s family. The film borrows a portion of its plot from A Farewell to Arms.

An attractive hunt for valuable treasure on a Palm Island called Hasta Dweepa from the 700-year-old Bherunda kingdom is the subject of the story. The movie is an adaptation of the famous American movie Mackenna’s Gold.

Do you know more Kannada movies that remade/inspired from international movies? Do comment down below!