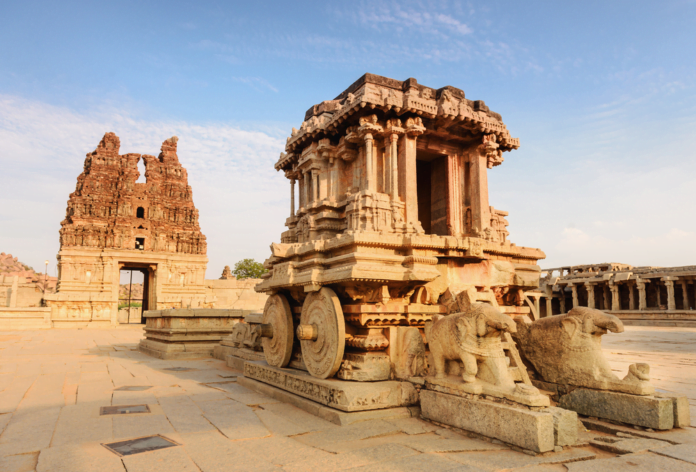 Karnataka is undoubtedly one of the South India’s best tourist destination. There is Arabian Sea Coastline, Western Ghats, The Ancient Sites, Wildlife Sanctuaries, and Hill Stations. Karnataka is a state known for the treasure of history and heritage. The Massive royal palaces and spectacular architectures, unique temples and world heritage sites. Here are must-visit historical monuments in Karnataka.

In this article, we list down the Top 10 Sakkath Historical Monuments in Karnataka

A place where gold and diamonds were sold on pavements back then. The capital of the Vijayanagara Empire.

64 km from Bellary, 340 km from Bengaluru, this ancient site is on the banks of river Tungabhadra in the northern part of Karnataka.

Hampi is UNESCO World Heritage Site. Recently New York Times released top 52 must-visit places of 2019 and guess what, Hampi is only one listed from India. We should all be proud of that right?

Hampi ranked Second in the New York Times must-visit destination 2019. One of the very prominent Historical Monuments in Karnataka.

The Capital of the Royal Dynasty The Chalukyas.

Located at 36 km from Bagalkot and 450 km from Bangalore, this ancient site is in Bagalkot district of Karnataka. The caves here are an excellent example for architectural monuments of the Chalukya era.

One of the top destinations of Karnataka Tourism.

Also called as Aivalli, Ahivolal or Aryapura, is a heritage site situated on the banks of river Malaprabha.

A good to know information, Aihole is a part of pending UNESCO World Heritage Site.

This place had more than 125 temples during the 5th and 8th centuries constructed by the Chalukyas. Most of the temples are located within 2-3 km.

Declared as a World Heritage Site. The monuments found here are from the 7th century and architectural beauty just amazes you.

Located at banks of Malaprabha river in Bagalkot district of Namma Karnataka.

Pattadakal is the popular tourist place in Karnataka.

Badami, Aihole, and Pattadakal are all known as Chalukyan Group of Monuments. These are Famous Historical Monuments of Karnataka

At a distance of 137 km from Namma Bengaluru and 35 km from Mysore is a perfect weekend getaway for the netizens of Bengaluru and Mysore. Most popular tourist place of Karnataka.

One of the best places to admire the South Indian architectural monuments. Located in Hassan district of Karnataka. Almost 4 hours of drive from bengaluru is a perfect weekend getaway.

The Belur Chennakeshava Temple is a 12th-century Hindu T built by the Hoysalas.

The Halebidu Hoysaleswara Temple is a 12th-century Hindu T dedicated to Lord Shiva. These places are popular as Temple Towns of Karnataka.

At a distance of 140 km from bengaluru and 50 km from Hassan, is a most popular for Gomateshwara Bahubali Statue. Located in Channarayapatna, Hassan district of Karnataka.

This place got its name after a small pond in the middle of the town referred as Bela – Kola means White Pond.

Perfect for a weekend getaway with your family and friends.

It’s one among the must visit Historical Monuments in Karnataka.

One of the most popular tourist place in Hyderabad – Karnataka region. At a distance of 639 km from bengaluru is perfect heritage site to visit on a long weekend.

Amidst the beautiful landscape, on the planes of Deccan Plateau, the Bidar fort is a must explore place for all the tourists.

A good to know fact – Bidar is famous for its

A historical town in Mandya district of Karnataka has got its own cultural, religious and historic importance and must visit place near Mysore.

At a distance of 124 km from Bengaluru and just 26 km from Mysore is the perfect location for a one day trip.

Srirangapatna has been nominated as a UNESCO World Heritage Site but the status is still pending.

Because the river Kaveri encircles it, giving it the appearance of an island, it is also popular as Island Town.

This is one of the best and world famous Historical Monuments of Karnataka.

The official residence and seat of the Wodeyar dynasty, palace is the most famous tourist destination to visit in Mysore, the cleanest city of India. At a distance of 150 km from Bengaluru is a perfect location to spend your holiday in the 2nd biggest city of Karnataka after Namma Bengaluru.

Constructed by the Maharaja Krishnaraja Wadiyar IV referred to as “Rajarishi”. This palace has magnificent Indo – Saracenic style of architecture. The best time to visit Mysore is during Nada Habba Dasara.

The best advice to you guys is to go on a road trip to explore the Historical Monuments of Karnataka with your friends and family.

You guys will have Sakkath trip visiting these beautiful and magnificent Historical Monuments of Karnataka.