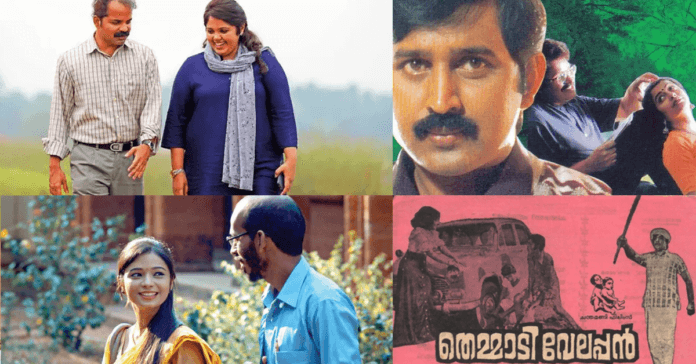 In Malayalam cinema, in its early days, most of them were commercial potboilers with an intention to make money. But as it evolved into a more realistic industry, Malayalam cinema has become more daring and experimental. It pioneered a variety of technical, narrative, and production innovations—all while remaining true to the spirit of its roots.

Even more interesting is that, there are Malayalam remakes of our Kannada movies. Did you know or recall any movie before reading this article?

So in today’s article, let’s look at popular Kannada movies remade into Malayalam.

The Kannada audience’s most acclaimed movie of 2016. It is about the murder of drivers who violate the law at a particular flyover and the subsequent identification of the offender by a team consisting of an intern journalist and a police inspector. The Malayalam remake was by VK Prakash in 2017. After a ten-year gap from performing in feature films, this movie marked Jomol’s return.

The movie makes it to the list of Kannada movies that were remade to Telugu.

Dr Raj’s ‘Daari Tappida Maga’ was a hit and ran in theatres for over 175 days across several cities. In a short cameo, Thoogudeepa Srinivas appears alongside Raghavendra, Dr Rajkumar’s second son. The film had a second release on November 22, 2019. The film was dubbed into Malayalam in 1976 and released as Kollaikaran. The Malayalam remake had Jayan as a lead in Manushya Mrugam in 1980.

There was praise across different sections of the audience for Ramesh’s negative performance. Amrutha Varshini is a cult movie from the Kannada film industry. The songs from this movie are part of many playlists even today. The same filmmaker Dinesh Babu, directed the film in Malayalam too. The songs were successful, but the remake appealed to the Malayalam audience less than it did in Kannada. The songs continue to be popular today.

The film is an official remake of the 2017 Kannada film Ondu Motteya Kathe. The story focuses on Janardhana, a bald Kannada teacher, who discovers his love for Sarala, a stout woman he met at a failed pre-arranged marriage event. Several critics and audience members applauded the film’s brilliance in tackling stereotypes based on appearances and body shaming issues. Also, this Kannada movie was remade into Hindi.

Dr Rajkumar got famous as a playback singer because of the hit song Yaare Koogadali from this blockbuster film. Hariharan was the director, while G. P. Balan was the producer. Prem Nazir, Madhu, Jayabharathi, and KPAC Lalitha appear in the movie. It was in theatres from November 12, 1976.

In conclusion, the trend of remaking movies across different languages was a trend in all the industries. Malayalam films are no exception.

Have you seen any of these remade movies in Malayalam?