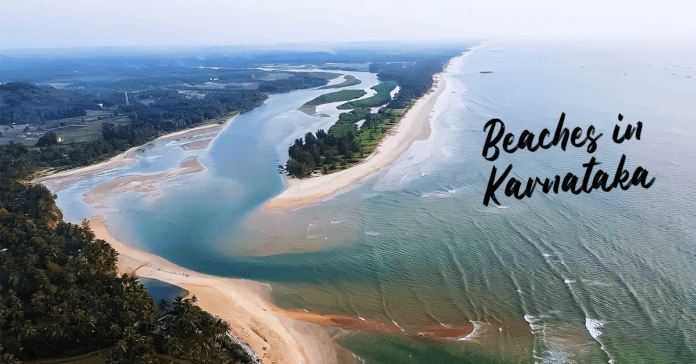 Beaches in Karnataka have wonderful stretches that run along the sea with dramatic rock formations or distant mountains in the background. In contrast, others are located next to a picturesque lake or river. You can enjoy an amazing beach vacation here with the whole family or a romantic getaway with your loved one.

1. Nadibag Beach – One of the Hidden Gem – Beaches in Karnataka

A unique rock formation overlooks the shore giving the area a supernatural look. One can spend hours admiring this scene as the pure white wave rushes against the cliffs. This quiet, tranquil beach is not at all on the tourist radar. Perfect for a stroll at dusk. Located in Uttara Kannada district Ankola.

A stunning beach with fine sand. The main attractions are the well-known lighthouse, enormous boulders, and gorgeous sand beach. And here, near the lighthouse, one can see how river streams merge with the ocean. This area has been used to shoot a lot of movies.

This picturesque location is one of the undiscovered beaches in Karnataka because of the small strip of land that separates the river from the sea. If you want to avoid crowds, this is one of the nicest beaches in Udupi. The vibes are incredible. Here, the sunset will win your heart. Viewing the beach on one side and the river on the other is breathtaking. The best location for a photo shoot, particularly for couples. This location is worth visiting.

The Uttara Kannada district of Karnataka is home to the Tilmati beach in Karwar. The beach is called Tilmati because the sand here resembles black sesame. The name is derived from the Konkani words “tillu” (sesame seeds) and “matti” (soil). The dazzling cream-colored sands that border most of the beaches on either side of Tilmati stand in stark contrast to the black sand at the 150-meter shoreline.

5. Rabindranath Tagore Beach / Karwar Beach – One of the Cleanest Beaches in Karnataka

The expansive beach’s golden sands provide an excellent area to unwind and spend time alone. Additionally, it features an aquarium, a planetarium, a toy railway, a recreational area, and a multicolored music fountain. A unique feature on the beach property is the Warship Museum. At the end of the beach, the River Kali empties into the Arabian Sea.

There is no doubt that Maravanthe is one of the most breathtaking beaches in Karnataka, perhaps in all of India. The Souparnika River flows on the opposite side of NH-66 from the beach, producing spectacular scenery that is the only one of its sort in India.

This particular beach is special because it combines white sand, rocks, a temple, and a lighthouse all in one location. Both the beach and the ocean are stunning and clean. The beach is not filled with shacks or stores and is not very crowded. To see the entire splendor of nature undisturbed, climb atop this lighthouse. The nicest aspect of Surathkal Beach is the tranquil view of the sunset across the water.

One of the quiet beaches in Karnataka, located in Ankola, yet still a hidden gem. Clear, churning waves in an open sea and manganese stones abound on the shore. The beach’s lovely curvature gives it an almost private property appearance. One could aimlessly walk around for hours.

A lovely beach in Ullal, Mangalore. It offers stunning views, breathtaking sunsets, and long hikes in a less crowded area. There are rocks on the beach where you can sit and enjoy the view and breeze. The beach is reasonably clean. Be cautious because it is believed that the waves are hostile. There are snack vendors and stores nearby. There are lots of parking spaces available.

One of the hidden beaches in Karnataka.

One of the most serene beaches in the area. From the ottinene cliff, you can view the river reaching the sea. The beach has seats, and there is a Someshwar temple close by. Here, a well-known Kannada movie song was filmed.

May your happiness be found at these beaches.

5 Offbeat Hill Stations in Karnataka to Escape the Crowd!