13 Classic Kannada Movies That Were Remade to Hindi 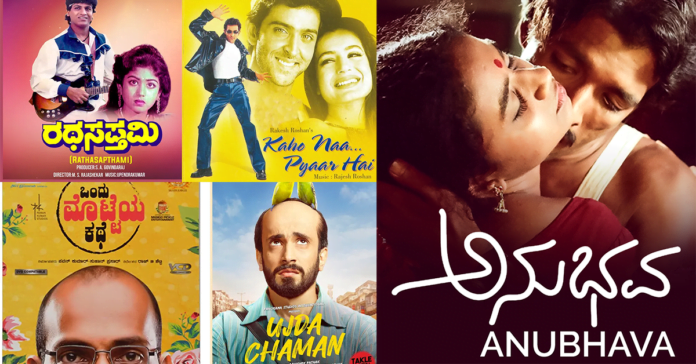 The movies produced in Kannada are appreciated by millions of people across the country and abroad. This success has made it possible for several movies to be remade in Hindi and other languages.

The following are some of the popular and classic Kannada movies that are remade in Hindi.

The movie is about a balding 30-year-old Bachelor who is given a deadline to find a wife or remain single forever. It is a remake of the 2017 Kannada film Ondu Motteya Kathe. The Hindi remake was an average hit at the box office.

Puttanna Kanagal itself directed the Hindi remake. The movie is a remake of the director’s own 1972 Kannada film Nagarahavu, which was based on three Kannada novels: Nagarahavu, Ondu Gandu Eradu Hennu, and Sarpa Mathsara.

The Kannada film Antha (1981) was remade in Hindi as Meri Aawaz Suno; despite the controversies due to the portrayal of politicians, the film is recorded as a “Super Hit” at the box office.

The Hindi film Arjun Pandit is a remake of the 1995 Kannada-language film Om. Vikas Dubey, a UP gangster, was reported to be a big fan of this movie. He is rumoured to have watched it over 100 times.

An adult drama directed by Kashinath. This Hindi film is the remake of the 1984 Kannada film Anubhava, in which Kashinath, who directed the Hindi version, was the director and lead in Kannada.

Rakesh Roshan, the director of the romantic action film Kaho Naa. Pyaar Hai directed this film, which marked the debuts of his son Hrithik Roshan and actress Ameesha Patel. The interval twist and a portion of the second half is inspired by the 1986 Kannada film Ratha Sapthami.

The movie Kartavya starring Dharmendra is a remake of the 1973 Kannada film Gandhada Gudi.

The Hindi film is a remake of the 1969 Kannada film Gejje Pooje, directed by Puttanna Kanagal.

The thriller film was a remake of Tarka, a 1989 Kannada film based on Agatha Christie’s play The Unexpected Guest.

The Hindi film Hum Paanch is a remake of the Kannada film Paduvarahalli Pandavaru, directed by Puttanna Kanagal. It also was made in Telugu later.

It is a remake of Dr Rajkumar’s popular Kannada movie Bangaarada Panjara. The movie was a box office hit.

The movie is based on the 1984 Kannada film Gandu Bherunda, which was inspired by the 1969 American film Mackenna’s Gold.

Anil Kapoor’s film Laadla is the remake of the Kannada film Anuraga Aralithu. The film was a superhit, grossing ₹11 crores domestically. It became the seventh highest-grossing Indian movie of 1994.