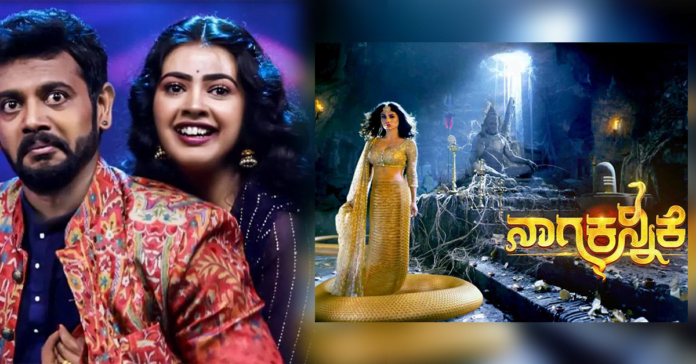 1. Olavina Nildana – One of the New Colors Kannada Serials

It revolves around Tharini and Siddhanth’s separate lives; they eventually become engaged due to a lie. They have forty days to make or break their marriage because they have different expectations for life. Will they survive or fall victim?

Anu must contend with her sister-in-law, who wants to replace the handlooms with power looms. Will Anu win this conflict and spare the weavers from suffering, or will she yield to social pressures? Watch Anu pursue justice.

3. Nagakannike – One of the Famous Colors Kannada Serials

The “ichchadhari” nagakannike, Shivani, is the centre of vengeance. Shivani marries Preetham to get closer to the people who killed her parents. What transpires, however, when she realizes she is falling in love with her adversary? Watch the epic series right away.

Nakshatra, a gifted dusky beauty, struggles to realize her dream of working as a T.V. anchor. When she eventually succeeds in landing a job, she only serves as the show’s voice; Shwetha serves as its frontwoman. Bhupathi falls in love with her voice while mistaking it for Shwetha’s, and trouble ensues. Watch Nakshatra’s progress.

One of the Colors Kannada serials with high TRP during the initial days of its launch.

A woman-oriented social drama. The story is about Harsha, who rejects marriage and has no desire to give up his irreverent way of life. When he meets Bhuvaneshwari, a Kannada teacher from a small town who adores her native country and language and is everything Harsha is not, she is just about to give up on him. Will they fall in love?

This serial is based on the true story of Purandara Dasa and his enormous contribution to Carnatic music. Purandara Dasa was a saint, philosopher, poet, and devotee of Lord Krishna.

Ramachari, who comes from a priestly family, is in a fight with Charulatha, who works for the prestigious Manyata Builders. Her ego bruised, she decides to use love as a weapon to manipulate him and ruin his peace of mind to exact revenge for the insult. Watch their story develop in Ramachari, the tale that tells the story of their intertwined lives.

Next up on the list of Colors Kannada Serials

Ginirama tells the story of Shivaram and the talented Mahathi. Mahathi believes the good-hearted Shivaram is a thug based on her encounters with him. Shivaram is the right-hand man of the local MLA Bhavani. Mahathi and Shivaram are used as pawns in a political and personal vendetta between Bhavani and her rival, and they are compelled to get married against their will. The remaining part of the story is about them falling in love amidst an ongoing political conflict.

The vibrant and simple Kannika, raised in a wealthy family, possesses a Divine Power that she is unaware of. She’ll fall in love with Charan, a cab driver from a slum she frequently visits, because she does not need wealth. When Yamini arrives looking for the divine power to claim as her own, the couple’s lives take a dramatic turn. Watch Kanyakumari as Kannika’s tale develops.

Inchara, who lacks a degree but is in desperate need of employment, is placed at Agastya Enterprises, a company run by the hated Agastya, a Rathod family scion. Both have a secret they would like to keep hidden, but Inchara is about to enter a crisis after Agastya discovers her secret.

The beloved daughter of Purushottam, Deepika, swears she will never date. She is certain of her choice because she is unaware of the ways of the heart until she meets Vishwanath Anand, an orphan and self-made man who owns an auditing firm. What transpires when Purushottam learns that his daughter is in love with the man he considers to be heartless and hates?

Chikkejamanru B.A. B.L. is a Bengali pre-independence period novel about a child bride named Bhoomika who marries a foreign-born barrister named Aniruddha. The narrative follows Aniruddha’s struggle to uplift Bhoomika academically and prepare her for the legal profession. Will their ill-fated union blossom into a happy union? Will Aniruddha be successful in empowering women?

One of the most famous Colors Kannada serials even to date. Also, the most talked about serial on social media.

A social drama, Mangala Gowri Maduve centres on the life of an eight-year-old girl compelled to wed an identically aged boy. While addressing the old, outdated practice of child marriage, the series also follows the young girl as she grows up. A coming-of-age tale about a young bride who accepts her in-laws’ traditions and customs but later speaks out against them.

Behold the magical development of a young Balu into Saint Balumama. Legends claim that he saved lives and emerged as a saviour for the commoner. He was well known for working countless miracles and winning millions of hearts with his deeds. Watch as his tale of conviction, devotion, and worship develops.

The tale of Meera and Ahalya, two daughters-in-law, is told in Nammane Yuvarani. Meera is the exact opposite of Ahalya, who makes the ideal daughter-in-law. But what happens if Meera is the only person left to save the house from destruction, especially since no one has faith in her? Watch her struggle as she does.

In Geetha, a young, intelligent girl experiences hardships at the hands of a powerful man. She challenges her circumstances and stands up for herself because she is strong and self-assured. Geetha has a husband who doesn’t care for her and a home that doesn’t want her. Can she truly call her home there? Can she fight her destiny and change it?

All these Colors Kannada serials are available on the Voot OTT app. Which one is your favourite?