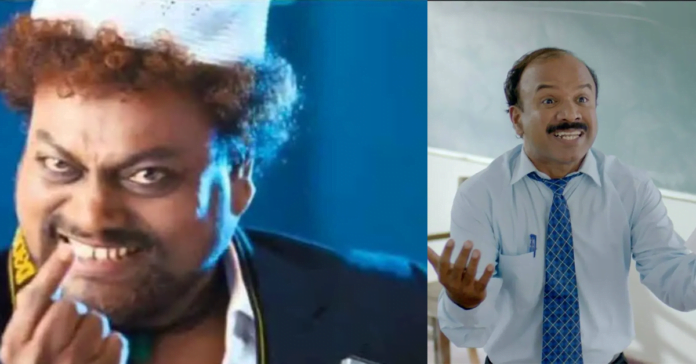 Kannada films have constantly produced humor for all genres of film and television in the vast ocean of Indian feature films and television series. People love Kannada comedy actors for their various comedic styles, including slapstick, situational comedies, sarcasm, and witty dialogues.

They make you laugh out loud and bring tears to your eyes. Their talent and comic timing bring these comedians to life on screens.

The following are a few Kannada comedy actors who won the audience’s hearts.

Rangayana Raghu has been one of the most popular actors in Karnataka in the past decade. He has performed in over 250 films and has been in the industry for more than 30 years. With his roles in movies like Duniya, Gaalipata, Junglee, and Ram, he has proven to be a very versatile actor. He is also a state award winner for his performances in Mani and Duniya.

Pratap, one of the most well-known figures in Kannada television, became famous through a popular prank show aired on Udaya TV and his comedy videos along with chikkanna. Besides, he has done various movies, and his presence in maja talkies gained him as well the show a lot of popularity.

An occasional screenwriter, lyricist, musician, actor, comedian, director, and producer – an artist with several talents. The majority of Kannada movies feature him in comic roles. One of the most well-known faces in Kannada cinema history. One of the comedians in Kannada who can do slapstick comedy with ease.

Another well-known name among the Kannada comedy actors who gained popularity with his debut film, Mata, features Jaggesh in the lead role. His performance in the 2009 movie Eddelu Manjunatha received critical acclaim. People still today recall the characters he portrayed through memes.

Umashree, who is unquestionably the best female comedian Kannada cinema has ever seen, is an actor from theatre background. She appeared in the comedy film Bangarada Jinke, which set her up for future appearances in that genre. It is impossible to forget her legendary performance in Kothigalu Saar Kothigalu and Anubhava.

Tennis Krishna, a contemporary master and the person who preserved slapstick humor, has appeared in more than 600 movies. Before turning to acting as a full-time career, he was a tennis coach, hence the name Tennis Krishna. He has a track record of appearing in 100 films alongside Rekha Das. Kannada films no longer feature him in comic roles.

He is well known comedian for those who grew up in the 2000s as Doctor Vittal Rao from Silly Lalli, a sitcom. He reached every household because of his comedic delivery style, voice modulation, and hilarious timing. Ravishankar’s last cameo appearance was alongside Golden Star Ganesh.

When comedy roles were mainly assigned to male actors, Rekha Das was one of the few women Kannada comedy actors who made her mark on the industry. Rekha Das’ contribution is essential to remember since she has appeared in more than 600 films, a record she shares with Tennis Krishna.

Actor Yash saw Chikkanna while he was performing on the Udaya TV program, and in response, he offered him a role in the 2011 film Kirataka. Despite having only supporting parts in Raja Huli (2013) and Adyaksha (2014), he received a lot of attention for his comedic performances, which helped him win the SIIMA Award for Best Comedian. The masterpiece film featured Yash and Chikkanna together on screen again.

Doddanna, one of the most well-known Kannada comedy actors in cinema history, appeared in nearly every movie during the 1990s and the first few years of the 2000s. Through comedy, he not only got people to laugh but also made them cry. His character acting style evolved throughout his career, but comedy was always a fundamental component of his work.

Vijay became well-known after playing Manjunath, Nograj’s peon, in the 2018 film Humble Politician Nograj. Combination of Danish Sait and Vijay Chendoor as Nograj, and Monjunath. The two had fantastic chemistry and timing, which captivated the audience’s hearts before being well-known for playing Thigne in the horror movie 6-5=2 (2013).

He has worked in well-known and popular films such as Kirik Party and Avane Srimannarayana. His work in these films helped him gain popularity with the Kannada population. One of the budding Kannada comedy actors in recent times. We would love to see him in more and more films.

A few Kannada comedy actors are still in the industry but aren’t as active as they once were. Is it the filmmakers who aren’t using them or the fact that they have moved on? Let us know in the comments