19 Facts About Kannada Film Industry That Will Surprise You 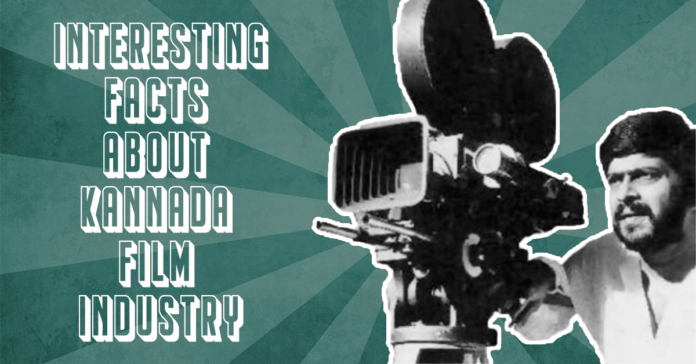 The vibes of watching movies on a big screen are magical; it’s not just about watching the film but also about how we feel when we watch it. The whistles, the claps for favourite heroes, and the roars for our favourite scenes are the best experiences anyone can ask for. Kannada film industry has given some greatest stars, mind-blowing movies and has contributed a lot to Indian cinema.

The best thing about Kannada cinema is that it has never failed to entertain its audience. We have got some of the most talented directors and actors in the Kannada industry who have made Kannada cinema what it is today.

The feeling of being a part of something big, the cinematic experience is unlike any other. This article will explore lesser-known facts about the Kannada film industry.

The first Kannada talkie, ‘Sati Sulochana’ (made way back in 1934), had a budget of just forty thousand rupees.

Upendra initially had Kumar Govind(hero of Shhh movie) in mind to play the lead role in Om; later, it went on to the hands of Shivrajkumar.

Did you know this? The makers of Kendasampige initially offered Challenging star Darshan the lead role, but they decided to move on due to a lack of dates.

Mungaru Male is the first Indian movie to be screened in multiplexes continuously for a year. This movie was a gamechanger for the Kannada film industry.

In the 1920s, the city of Bangalore got its first theatre. The Paramount Theater, later renamed Parimala Talkies, was located in City Market.

The first hero of Kannada cinema is Subbaiah Naidu. The grandfather of Surjan Lokesh, a famous host.

Puneeth Rajkumar worked as a production coordinator for the film Swastik. The film starred Raghavendra Rajkumar, and Upendra directed it.

Milana ran for about 450 days in multiplexes.

Shankar Nag was the first Indian director to film a movie underwater. The movie was ‘Ondu Mutthina Kathe’ and starred Dr Raj Kumar.

11. Debut in the Kannada Film Industry

12. Pan Indian movies back then

Kannada movie “Mahishasura Mardini”, released in 1959, was distributed and dubbed in 8 different languages and was superhit in all languages.

The Kannada film “OM” has been re-released more than 500 times over the past 20 years. This is an all-time record in the history of India’s cinema.

15. The tune of the song Anisuthide

The tune of ‘Anisuthide’ was first proposed for the movie America America by Manomurthy.

According to a few media sites, here are some movies that Rashmika Mandana rejected. Jersey, a film by Sanjay Leela Bhansali and Ram Charan’s proposed film with Shakar.

19. The Nata Sarvabhouma of the Kannada Film Industry

Dr Raj Kumar has been awarded a Doctorate for his work as an actor. He is the only Indian actor awarded the prestigious Kentucky Colonel by the USA’s Kentucky state.

These are a few things you might want to know about the Kannada film industry. If you know any more information, leave it in the comments!