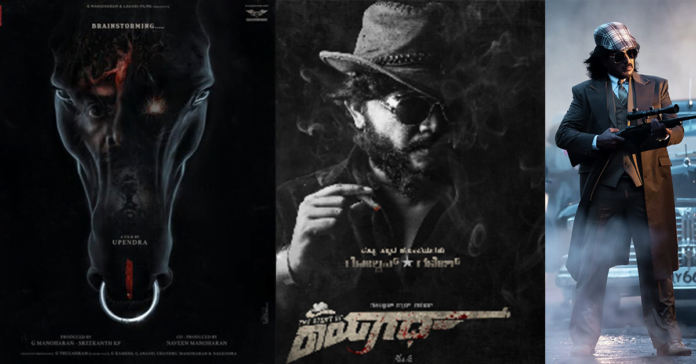 The blockbuster K.G.F. chapter 1 and 2 has changed the game rules in the Kannada film industry. Now, Kannada directors and producers are aiming higher than ever before. Several upcoming pan India Kannada movies will release this year and next year, taking the Indian box office to greater heights.

Audiences across India are eager to see more pan-Indian content from the Kannada film industry. So take a look at some of the films that are getting ready for a pan India release.

The story of a man and a dog. Kiranraj K’s adventure comedy-drama film stars Rakshit Shetty, Sangeetha Sringeri, and Raj B. Shetty. Already the premier shows have impressed the audience. The movie is releasing on June 10th.

The story is about the freedom fighter’s son, who gets trapped in the mafia world. He becomes a gangster and one of the most notorious criminals of all time. It stars Upendra, Sudeep, Manoj Bajpayee, Prakash Raj, etc.

The supreme director of India, Upendra, is all set to direct again after seven years. The film’s promotional poster was also released, featuring a concept design that hints at the movie’s mysterious plot. The presence of a horse-like animal with other characters in the poster makes viewers physc.

It is a dream project of Power star Puneeth Rajkumar. The movie is one of its kind. The movie is an entertaining cinematic experience that features the Power Star in a daring adventure.

It is speculated that Challenging Star Darshan’s upcoming Kannada movie is about saving a Kannada medium school. Darshan will play an N.R.I. in the film.

Head Bush is a crime drama based on the life of the underworld don of Bengaluru MP Jayaraj. Shoonya directs the film and Agni Shridhar writes the script. It stars Dhananjaya in the lead role. Head Bush also stars Vasistha N Simha, Payal Rajput, and Loose Mada Yogi in prominent roles.

Prashanth Neel, who also wrote K.G.F., writes the action-thriller, which will be directed by Dr. Suri. The movie casts Sri Murali as the lead actor. Vijay Kiragandur produces it under the Hombale Films banner.

Martin is an action thriller starring Dhruva Sarja as the main character.

The Story of Rayagada

Simple Suni writes and directs this action-adventure movie. The movie stars Ganesh in the lead role.

The science fiction film Billa Ranga Baasha is set in 2209. The film reportedly cost Rs 75 crore to make, making it one of the more expensive films in Sandalwood. Kicha Sudeepa directed by Anup of Vikrant Rona fame, stars in the movie.

Which one you are waiting for?

13 Classic Kannada Movies That Were Remade to Hindi