These 10 Contestants Can Make it to the Bigg Boss Kannada OTT. 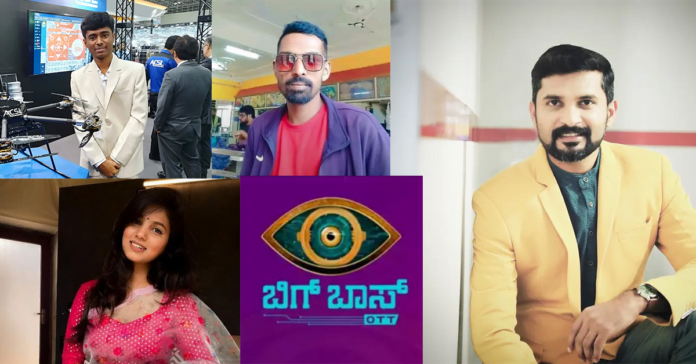 Voot will begin streaming Bigg Boss Kannada OTT in Kannada from today, i.e., August 6. The show will be hosted by Kichcha Sudeep and streamed nonstop. All the drama and action inside the BB house will be available to the show’s viewers day and night. Fans eagerly await the release of this first edition of the Kannada version. There are many well-known names on the list for this short season.

A Journalist and news presenter at News First Kannada. This is the first time he appears on a reality show apart from news events. He is pretty famous for his interviews with Kannada celebrities.

Through her TikTok and Instagram reels, social media creator Bhumika Basavaraj has gained popularity among the Kannada audience. With a whopping following of 797K+ followers on her Instagram account makes it to the list of Bigg Boss Kannada OTT season.

Famous TV actress and social media influencer Sanya Iyer. As the lead actor, she made her acting debut as Putta Gowri in the television series “Putta Gowri Maduve.”

An Actor/Director and RJ in 92.7 Big Fm. Roopesh has worked in popular movies like Govinda Govinda.

Rekha Vedhavyas has acted in numerous motion pictures. She is an actress who speaks several languages, and her name has been buzzing on social media.

Son of accomplished actor Srinivasa Murthy, Naveen Krishna. A notable figure in Kannada cinema. He began acting as a young actor before making his lead acting debut in the 2000 movie Shrirasthu Shubhamasthu. His best-known film is Haggada Kone.

Sa Re Ga Ma Pa Kannada is the show that made singer Asha Bhat famous. She reportedly agreed to be on the Bigg Boss Kannada OTT and would appear in the first season.

A well-known comedian and mimicry artist named Mimicry Gopi is well renowned for mimicking the dialogues and mannerisms of celebrities.

As a producer and director, Ravi Srivatsa primarily works in the Kannada film industry. He is best known for his work in popular movies like Deadly Soma.

In the Sandalwood cinema, Tarun Chandra is a well-known actor. He appeared in his first blockbuster movie, Khushi, in 2003. He has since become famous for his films, such as Geleya Love Guru and Gaana Bajaana.