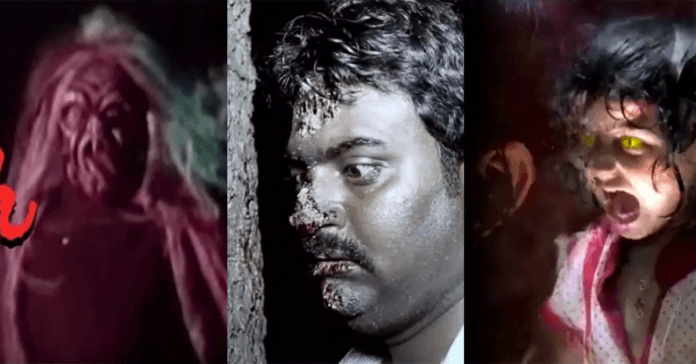 Watch these Kannada horror movies to experience a spike in your adrenaline rush during the night.

A horror-thriller Kannada movie. With this, Upendra established himself as an emerging star director. The movie starts with a lighter note with Kashinath’s hilarious performance; the director cleverly brings in the edge-of-the-seat horror experience as and when the story progresses.

2. Naa Ninna Bidalaare – One of the Best Kannada Horror Movies

One of the best on-screen couples, Anant Nag and Lakshmi, are the lead. After being rejected by Ananth Nag, a girl transforms into a ghost and comes back to haunt his marriage. The movie was recreated in Hindi as Mangalsutra, with Anant Nag and Rekha taking on Lakshmi’s role. Enjoy the spine-chilling moments while watching this movie.

The audience loved both the Kannada Horror movies(Apthamitra & Aptharakshaka) and were awe-struck by the soundarya performance as Nagavalli.

A remake of the hugely successful Manichithrathazhu movie in Malayalam. You can see the ghost in the screenplay, which is well-written. Interestingly, it makes you doubt all the characters, but the climax had a surprise twist.

A tragic journey accident is the center of the story. According to reports, this Kannada movie was inspired by the 1999 American indie film The Blair Witch Project. A must-watch for all trek enthusiasts.

A fair effort to bring out a horror/thriller Kannada movie. The story’s protagonist is a TV host who debunks superstitious occurrences and is searching for a significant 100th episode. However, a decent watch apart from the climax.

Yandamoori Veerendranath Rao penned the story, and Vemagal Jagannath Rao directed it. Tragedy, witchcraft, and hypnotism are central themes in this film.

In those days, the film had every aspect a horror film should have. You get to watch an Indian Dracula. The movie features Dr. Vishnuvardhan and Bharthi as the lead.

The film buzzed by introducing the grandson of legendary Kannada comedian Narasimharaju. The screenplay keeps you engaged despite its low budget. Surely you will enjoy the watch!

Conjoined twins are the subject of the movie’s plot. The conjoined twins Charu and Latha were separated through surgery by their mother after Ravi fell in love with Charu, one of the twins. But once Latha passes away, she returns as a ghost to take vengeance.

10. Shivalinga – One of the Super Hit Kannada Horror Movies

A CID officer reopens an alleged suicide murder case. The spirit takes over the officer’s wife while he investigates the case further. The twist in the climax is fantastic. A super hit. Tops the list of Kannada horror movies.

The movie is a compilation of two linear plotlines connected. The setting for the two linear storylines, which are situated in the countryside of Karnataka, is an abandoned mansion.

KGF fame music composer is the writer and director of the movie. There is a story about a man returning to his village to start a school for the children there. With an atmosphere of horror, the film depicts real-life scenarios (the culture of coastal India).

She begins acting oddly when Chandu and Sangeetha get ready for marriage. After investigating the matter, Chandu discovers that Sangeetha is under the influence of her mother’s ghost from a past life. Few goosebumps scenes in the movie make it to the list of Kannada horror movies.