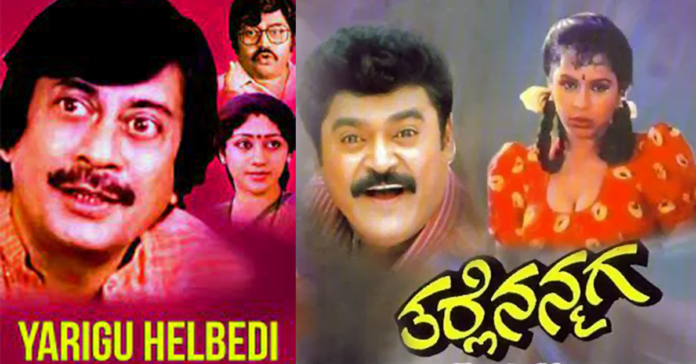 Comedy movies are a great way to reach a broad audience. If you can make people laugh, they’ll love to watch it with the right proportion of humour and intellect, no matter how old they are or their interests, it will be sure shot entertainer. You’ve got something special on your hands to win their hearts! Here are 17 all-time best Kannada comedy movies you shouldn’t miss in this context.

Ganesha lives happily in a housing complex(Vatara) owned by Ramanamurthy when he falls in love with Adilakshmi, a young woman who sings under the stage name Shruti, the two face many obstacles that test their relationship.

Lambodhara is a small-time crook who finds himself in a situation and decides to make good money. He blackmails three men known to a recently deceased woman who was the victim of their immoral acts, demanding money from them.

The story revolves around a couple who want their son to marry a rich girl for want of dowry. Their son, however, marries a girl from a poor financial background—much to their annoyance. The rest of the story shows how the son eventually changes his parents’ outlook on life.

Two pairs of identical twins are separated at birth. When they later meet and cross paths, the confusion among people over their looks unleashes a string of comical events.

Three inmates have served long sentences but do not want to leave jail as they do not want to face the outside world. An inspector with a kind heart releases them as he finds goodness in these men and wants them to lead a good life. And the events after this are all ROFL moments.

Guruprasad’s debut film is a cult black comedy about a matha/mutt that is the most sacred institution in India. The movie shows that enlightenment is possible only if we can overcome emotions like anger, lust, desire, etc.

A cult black comedy by Guruprasad. Manjunatha is a lazy man who doesn’t want to have to work hard to earn a living. He marries a woman who works in a garment factory and decides to make some changes in his life.

Rama is married, but he has an affair with Priya. Although she knows about his wife, she continues to pursue him. Shama learns about the affair and decides to reunite him with his wife.

Pandu and Parvathi pretend to be married to win a massive amount of money in a competition, but they must overcome hilarious challenges to succeed.

Several disciples are cursed and cannot break the curse until the angel gets married. To help their teacher, they engage in acts to defeat their foes.

The movie is a lighthearted comedy about the challenges of a newly married couple.

Krishna and Sundar own a bus. They face many problems due to the bus’ poor condition, but their life changes when the minister’s daughter takes refuge in their bus.

A Tamil remake. Chandru and Aishwarya, two classmates, help each other through difficult times in their lives. However, trouble begins when they fall in love with each other.

A man targets gullible people and cheats them out of their money. He builds a house on the plot allotted to him with that money.

Sidlingu’s love of cars takes him to Srirangapatna, where he meets Mangala and realises his dreams. He falls in love with Mangala, who thinks he is just a naive boy.