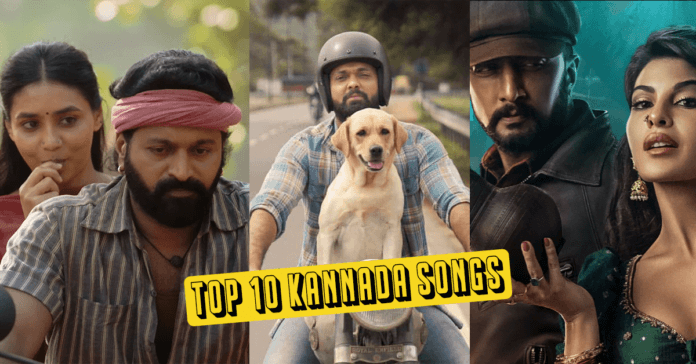 This year’s top 10 Kannada songs are energetic and provide the right kick while listening to them. Especially the latest ones from Kantara and others; you’re likely to get hooked to them the more you hear. As far as Kannada movies and music are concerned, the year has been exceptional in terms of reach and popularity.

Featuring Jacqueline Fernandez and Kichcha Sudeepa went viral within a few days of being released in their respective languages. It became a sensational song among netizens with a hook step on Instagram reels. With 59 million views, this Kannada song became the highest viewed on youtube this year.

From the recent national sensation film Kantara, this love song won people’s hearts with its unique folklore tune. This music gives the movie a special energy. It is a welcome song for the arrival of Leela, aka Sapthami Gowda, the movie’s female lead. This song also captures the entire essence of the town Keradi in coastal Karnataka in the film. One of the best top 10 Kannada songs and still counting.

This fast-paced song from KGF Chapter 2 is a complete bundle for the mass audience. Aditi Sagar and Ravi Basur, the music director, respectively, are the singers who give off a daredevil feel to the listeners. The song is mixed in 6 different languages.

This joyful song by Anoop Selin from the film Totapuri resonated with audiences of all ages. Everyone, young and old, enjoyed and loved this groovy song. Through Instagram reels and other media, it spread like wildfire within a few days of releasing it. The song features some hilarious dance moves by Jaggesh, Aditi Pradhudeva and others.

At the beginning of the year, this song was all the rage. The spectacular south Indian vocalist Sid Sriram performs the heartfelt lyrics written by Shashank, which were set to music by Magical Composer Arjun Janya. A profound journey of love, faith, affection, and adoration is depicted in the song. Many kept playing the song on repeat thanks to its captivating lyrics.

This love track from the recent movie Guru Shishyaru got attention for its tune and visuals. It is a classic love song where Nishvika’s character Sooji has a crush on the physical trainer.

The intense number from KGF Chapter gives an idea of Rocky’s character in the film. The music is by Ravi Basrur, and the lyrics are by Shabbir Ahamad.

The hilarious bond between the protagonist Dharma, played by Rakshit, and a Labrador dog is shown in the “Torture Song.” There are several amusing and entertaining scenes in the video song.

The only romantic song in the action-packed movie KGF Chapter 2. The music impresses the audience with its lyrics and captures the growing bond between Rocky Bhai and Reena in the film.

Many of them had the song playing on repeat because of its inspiring lyrics and calming sound. Darling Krishna is the hero in this Love Mocktail sequel. The whole album deserves appreciation.